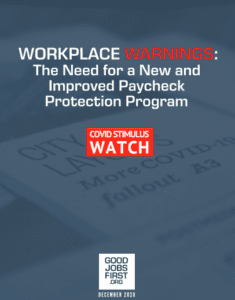 More than 190,000 American workers have been laid off since March across 1,900 companies that received loans through the Paycheck Protection Program (PPP). The companies intended to support 251,000 workers – instead, they laid off 76 percent of them. About one in eight of those workers lost their jobs permanently.

Among the affected workers in 41 states and the District of Columbia, virtually none got 60 days’ advance notice of their layoffs and more than two thirds got no advance warning at all. Indeed, four out of five of the PPP loans were approved after layoffs had already occurred. For transactions with sufficient disclosure, loans were approved an average of 32 days after WARN notices were issued.