You Can Count On Us; Can We Count On You? 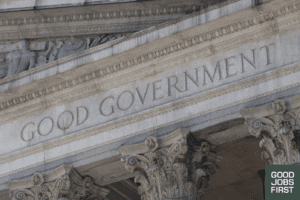 My name is Kasia Tarczynska and I’m the Senior Research Analyst here at Good Jobs First.

For 24 years — and a decade for me — we at Good Jobs First have been shining light on public records, revealing which corporations get public money and what communities get in return for it.

This year, we spent months analyzing company-specific disclosure of 250 major subsidy programs in all 50 states and the District of Columbia. Our findings, in Financial Exposure, show how our long-term efforts have borne fruit – almost all states now disclose at least some data on subsidized companies. That wasn’t the case when we wrote our first “report card” study 15 years ago.

Nevada, for example, once had no records online – but now, it’s leading the states on subsidy transparency.

But at the same time, the state’s #1 ranking carried with it a score of only 63.6 out of 100. That shows there is a lot of room for improvement, and we intend to keep putting on the pressure to dramatically raise those scores.

We hope you’ll also be part of that effort!

Every year, corporations extract $95 billion from states and communities in economic development subsidies. Those companies know that many places are hungry for investment, so they come in with promises of jobs and demand costly tax breaks and other perks for the privilege of hosting them. Most of the subsidy negotiations are done behind closed doors without community input; too often, deals stay in the dark long after they’re approved.

Good Jobs First has been fighting to expose and change this secrecy and unequal bargaining dynamic, and we — together with the many groups we assist — are making progress.

Besides moving Nevada from worst to first, our transparency reports helped to move states like Tennessee, Kansas and South Carolina from disclosing nothing on subsidized companies to telling their residents which businesses get (at least some) of their money. We gave Georgia a zero on transparency last spring, but the state later posted online subsidy contracts for its $1.5 billion deal for Rivian and the $1.8 billion it gave Hyundai. Texas started disclosing which companies gets subsidies granted by local governments.

Of course, sunshine is only the critical first step in reform. But if you look at all of the major subsidy programs that have been eliminated or curtailed in recent years — Chapter 313 in Texas, MEGA in Michigan, ITEP in Louisiana, enterprise zones in California, film credits in several states — disclosure enabled investigative journalism, community organizing and meaningful change.

Corporate lobbyists with deep pockets are not resting. At every turn, they are seeking more and bigger tax breaks and more secrecy. Our friends in Texas are working to permanently end a massive property tax abatement program (and any new versions of it) that costs over $1 billion a year. A few years ago, we and our partners pushed hard for an accounting rule that improved transparency and enabled us to show that 51 school districts in Texas lose more than $1,000 per student per year to these corporate tax breaks.

We’ve been helping a faith-based network for nine years to win and defend reforms to a notorious subsidy that lets industrial giants pay only a fraction in taxes they owe to local schools, hospitals, police and libraries.

We’re helping groups in Alabama calling for badly needed transparency – incredibly, state leaders there are pushing for costly expansions of subsidies even though they have failed to fill the public in on what the current program achieved (or even, which companies got the money in the first place).

Other state and local battles will pop up, as they always do. And we’ll be here to help.

We want our economy to grow in inclusive, equitable and democratic ways. Our data plays a vital role in those efforts. I hope you’ll consider supporting the painstaking work that goes into compiling that.

I’m off now, to go add some fresh data to Subsidy Tracker and Amazon Tracker, so we all know where our money is going.