Winning the Race: How America Can Lead the Global Clean Energy Economy 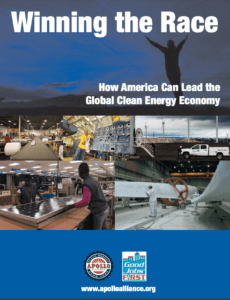 Co-published by the Apollo Alliance, this report argues that the United States should commit to the development of a strong domestic clean-energy manufacturing sector, but in doing so it should avoid the risk of indirectly subsidizing the expansion of the sector in offshore low-wage havens. An analysis of the recipients of the federal government’s Advanced Energy Manufacturing Tax Credits shows that some are going to companies putting their primary emphasis on producing wind and solar generating equipment in countries such as China and India.