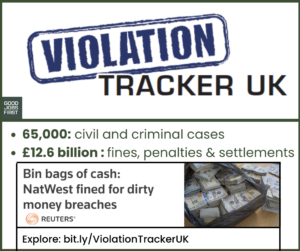 Violation Tracker UK, the first comprehensive database of corporate regulatory infringements in the United Kingdom, today posted the first update of its dataset. Covering the three months since the resource was introduced in October 2021, the update adds 2,500 new cases with monetary penalties totaling £605 million.

Violation Tracker UK, which the public can use free of charge, is produced by a team of UK and U.S. researchers led by the Corporate Research Project of Good Jobs First, a Washington, DC-based non-governmental organisation which provides a similar research tool for the United States.

As a result of the NatWest and HSBC cases, the Financial Conduct Authority accounted for the largest monetary penalty total among the more than 40 regulatory agencies covered by Violation Tracker UK (the Standard Chartered case was brought by the Prudential Regulation Authority). In terms of the number of cases, the leaders were the Employment Tribunal (1,025) and the Health and Safety Executive (965). Only cases with adverse findings against a company (not individuals) are included.

“We will continue to update Violation Tracker UK on a regular basis to enhance its usefulness as a tool for monitoring regulatory compliance,” said Good Jobs First Research Director Philip Mattera, who leads the work on the database.

With the update, Violation Tracker UK now contains more than 65,000 entries dating back to the beginning of 2010. Total monetary penalties amount to £12.6 billion. Individual entries are linked to a universe of more than 670 large parent companies.