Under Armour’s TIF deal: ‘1% versus the rest of the city’ 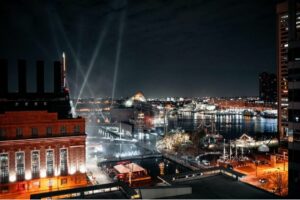 Under Armour’s proposed headquarters, part of a massive 235-acre development along Baltimore’s waterfront, is drawing fresh criticism as it moves to break ground — skeptics wonder if it will leave residents on the hook if its fails to generate enough property tax revenues to pay back municipal bonds sold to fund the project.

The funding tool used to offset the project’s costs, tax increment financing, or TIF, subsidizes companies by refunding or diverting a portion of their taxes to help finance development in an area or (less frequently) on a project site.

Alexis Keenan and Reggie Wade wrote about the project for Yahoo! Finance:

“In the case of Port Covington, it really was the 1% versus the rest of the city,” says Greg LeRoy, the director of Good Jobs First, which opposed the deal based on concern that the city’s financing deal too heavily favored the developers over the city’s poor residents. “You’ve got this billionaire private enterprise, owned by a billionaire, getting the biggest TIF deal in U.S. history, east of the Mississippi.”

Because TIF debt is not backed by the full faith and credit of the city, the city is not officially responsible to pay its debt service. However, LeRoy cautioned that cities have stepped in to cover underwater TIFs when recessionary conditions have failed to create enough increment to cover the debt service…

“What else could the city have done with its borrowing ability and infrastructure budget to benefit the city’s incumbent residents rather than the prospective residents of a substantially vacant area?” LeRoy asked.

The developers are kicking off construction with approximately $660 million in TIF bonds issued by the City of Baltimore, $349.5 million from the state of Maryland, $327.8 from Sagamore, and $224.2 in federal funds. Another $4 billion would come from private investors.