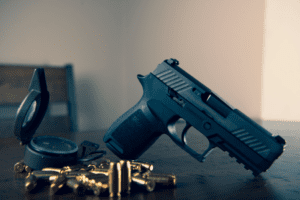 While the country mourns yet another mass-shooting, little attention is being paid to the fact that the companies producing the weapons are being subsidized by taxpayers. The nation’s top three gun manufacturers have received more than $105 million in taxpayer subsidies, most often as inducements to move their manufacturing plants.

Large subsidies came in the wake of the school massacre in Newtown, Connecticut. When legislators in Connecticut and other northeastern states that are part of “Gun Valley” passed more restrictive gun laws, firearm makers let it be known they wanted to move to more friendly locales. Southern states with loose gun regulations launched a bidding war to lure the companies.

These subsidy packages may have been unnecessary. If the main point of the moves was to escape from states seen as being unfriendly to guns, then the companies would presumably have ended up in those Southern states even without the financial incentives.

Here’s a break-down of subsidy totals, according to Good Jobs First’s Subsidy Tracker;