The Lens: Top 10 greenhouse gas emitters in Louisiana have paid more than $200 million in local tax revenue due to state-level reforms, data shows 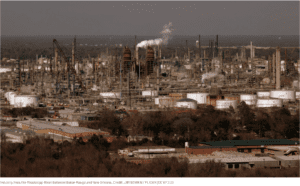 The top 10 emitters of greenhouse gasses in Louisiana have paid more than $200 million in taxes to local jurisdictions, to which they would not have otherwise been subject, because of the

state’s decision to reform its industrial tax exemption program (ITEP) in 2016, according to data shared with The Lens by Together Louisiana, the statewide network of nonprofit and community organizations responsible for pushing the state to reform ITEP …

When you “start to restore better schools, better infrastructure, better public health, better public safety, that’s good for the business climate – that’s a confidence builder for investments,” LeRoy told The Lens. “I think it’s no accident that the economy’s been doing better since the reforms kicked in.”

Read the full story at The Lens.