TIF Causes a Rift Between Schools and Developers in Chesterfield, Missouri 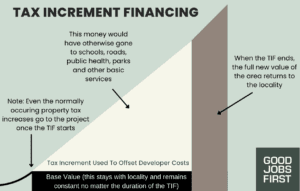 Public school districts in Chesterfield, Missouri are pleading with city officials to reconsider a proposed $353 million tax incentive package for developers to build two mixed-use communities. On November 21, the Chesterfield TIF Commission will vote whether to recommend the deal, then it will head to the City Council for final approval.

The deal includes demolishing the existing Chesterfield Mall and replacing it with two mixed-use projects including luxury apartments and townhomes, shopping, restaurants, and a plaza. Sounds like smart in-fill development instead of a 46-year old mall that has significantly declined in popularity and occupancy since 2017….right?

Yes, if the developers paid their fair share of taxes.

Instead, the developer wants Chesterfield to divert the new tax revenue generated by the projects for their exclusive benefit. That would happen through an economic development tool called tax increment financing. TIF works by designating a certain geographic area as a “TIF District,” capturing resulting from new development (this project captures both property and sales taxes), and then diverting that revenue to subsidize the development. That diversion means local public services do not get the new revenue they would normally get from new development. (See our FAQs on TIF.)

Under Missouri law, the entire 241-acre TIF District’s growth won’t support public services  for 23 years. Yet the new housing and jobs will mean that Parkway School District and Rockwood School District will get new students, but no new revenue to support them. There is no such thing as free growth.

The school boards warned the city of these repercussions: increased class sizes, increased student-to-teacher ratios, classes held in trailers, and possibly asking voters to support a tax rate increase to cover the additional costs of educating the new students.

The city and the school districts disagree over how many new students the developments will likely bring – the districts project 835, the city says 236. While the differences are not marginal, the principal issue remains: why should local governments give up one of their main sources of revenue (property tax) to subsidize the creation of high-end developments?

School districts in Missouri do not have the legal authority to approve or pull out of tax break deals like this one; TIF is an intergovernmental free lunch controlled by city governments. So in Chesterfield, the Parkway and Rockwood school districts are passive losers, rightfully upset about their future revenue abated away.