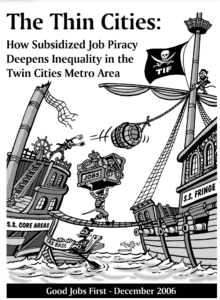 Economic development incentives that were originally intended to help revitalize older areas are instead being used by outlying suburbs to pirate jobs and tax revenues from older cities in the Twin Cities metro area. Local officials need a cooperative structure to curtail zero-sum job piracy and focus instead on jointly promoting the region. And the state should use incentive deals as leverage to make more jobs transit-accessible and alleviate traffic congestion.