Texas Trouble … and the Trouble (still) with Opportunity Zones

Let’s start with some huge news out of Texas, where a massive corporate subsidy program is now on track to expire next year.  The program is called Chapter 313, and an explosive Houston Chronicle series (paywalled!) found how little Texans get from a program that costs them over $1 billion per year.

The $1 billion could also fix potholed roads or build affordable housing, or I don’t know, help make sure households have heat when there’s a snowstorm.

Organizer Broderick Bagert of Together Louisiana , which has been helping that state reduce its own destructive corporate welfare program that, like in Texas, mostly benefits the oil and gas industry, hopes this is just the beginning.

“In a lot of cases, it’s not that these battles have been lost — they just haven’t been fought,” he told The Intercept . “What you’re seeing for the first time is the battles being fought.”

But don’t expect supporters of Chapter 313 to quietly go away. Their propaganda machine is hard at work , claiming Texas will lose future investment. Of course, oil and gas production happens where there is feedstock in the ground; tax breaks are not a site location basic.

As the Chronicle investigation so well showed, each job the program creates costs $211,600 (a conservative estimate), fewer than 2.5 percent of applications were ever denied, and only one company ever had to pay back subsidies, despite dozens failing to meet job creation and wage agreements.

The war may not be over, but this group of Texans won the Battle of 313. And they’re watching and ready for what comes next.

“The defeat of these bills sends a strong statement that Texas will not underwrite the bottom lines of corporations on the backs of Texas schoolchildren and taxpayers,” the Rev. Miles Brandon, a leader with Austin Interfaith, an IAF affiliate, told the Chronicle .

This evening (Tuesday, June 15), I’ll be part of a conversation about Amazon with journalist Alec MacGillis, author of the just-released “ Fulfillment: Winning and Losing in One-Click America .” The book details the growing gap between winning and losing regions, and how Amazon not only exacerbates the trend but exploits it to its advantage. I’ll talk about how communities can use their power to demand Amazon do better for its workers and the environment and pay for roads, schools and other infrastructure demands its presence brings.

On Friday, June 18, our research director Phil Mattera returns to the Investigative Reporters & Editors Conference to demonstrate our Covid Stimulus Watch database and how to dig into the CARES Act, the biggest relief package in U.S. history. Learn how to track fraud, identify lapses in oversight and uncover inequitable spending, including finding corporate recipients with spotty records and finding disparities in pandemic education funding.

Phil will be joined by Washington Post’s Ziva Branstetter, NBC’s Andy Lehren and the Project on Government Oversight’s Sean Moulton.

The Opportunity Zone program, touted as a way to drive private investment into low-income communities by offering big tax breaks, isn’t working, writes Aaron Seybert of the Kresge Foundation. Zones need transparency and to center the voices and needs of communities, or they need to go. “OZ is just the latest example of policymakers and investors doing something to low-income communities rather than with them,” he writes. 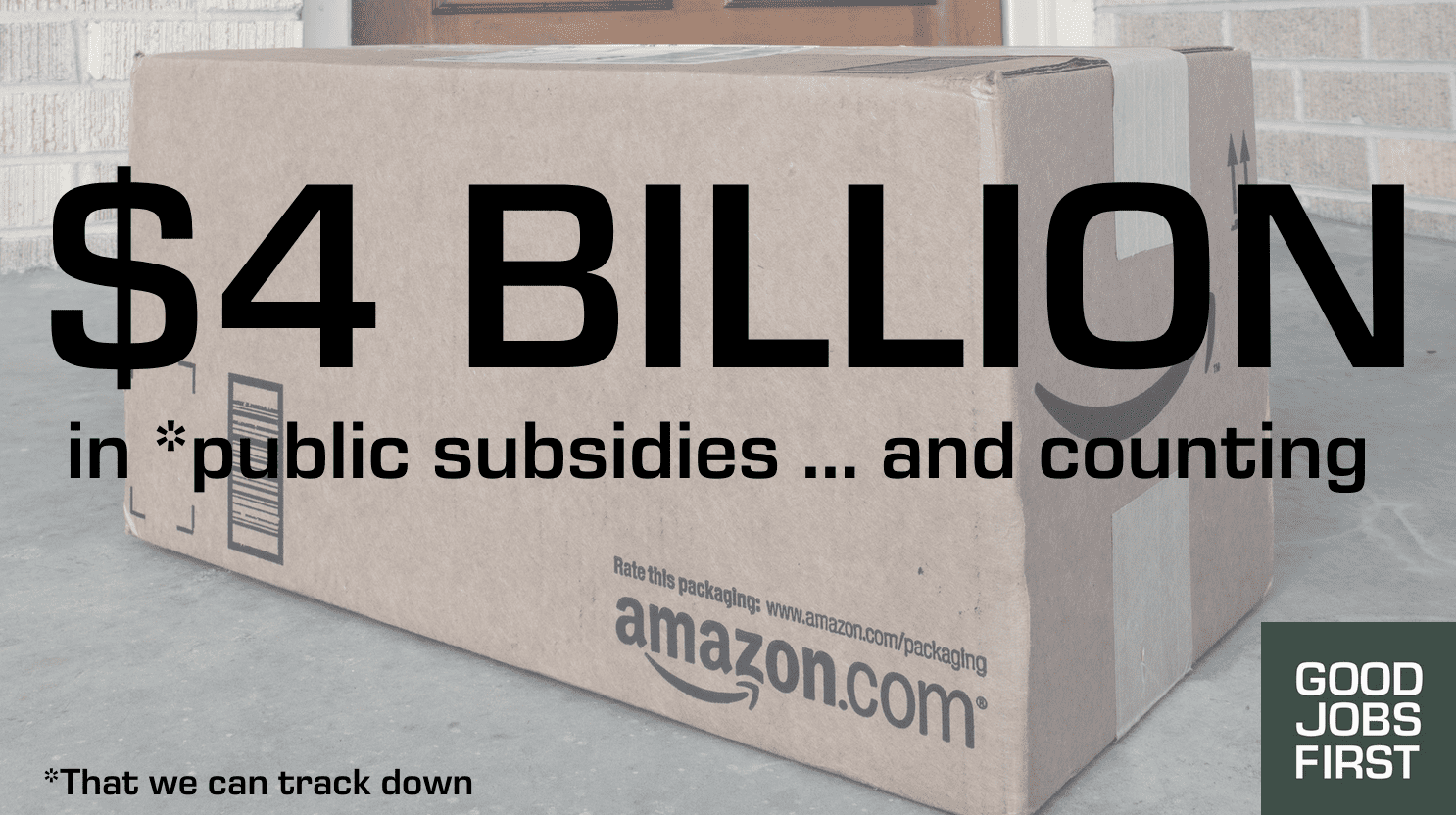 We recently revealed Amazon has now received more than $4 billion in public subsidies in the U.S., a tally that keeps growing despite its pandemic riches. So far in 2021 alone , it has received at least $594.6 million, Good Jobs First research analyst Kasia Tarczynska found. I wrote about what residents can do to turn the tables. Amazon should be paying communities for locating in them, not the other way around.

I reached out to Bakan to tell me what inspired the sequel and what can be done to weaken corporations’ dominance in society. Here’s our conversation, in five questions.

We’ve got an immediate opening for a research analyst to guide our work tracking federal spending related to the pandemic. It’s a great opportunity for someone with federal policy experience who loves using data to tell stories, hold corporations and government accountable and wants to drive positive change for working families and communities.

That’s the word for now. Until next time!