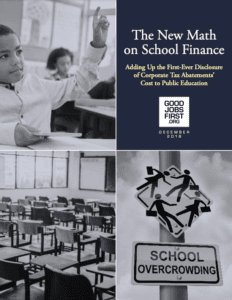 Washington, DC — A new report from Good Jobs First finds that public schools across the country lost at least $1.8 billion last year as a result of economic development tax incentives granted to corporations. The study analyzes the financial reports of 5,600 of the nation’s 13,500 independent public school districts. The report can be found at https://goodjobsfirst.org/newmath.

School districts in 10 states, led by South Carolina, New York and Louisiana, collectively lost $1.6 billion. If this money were instead reinvested in hiring new teachers and reducing class size, these ten states alone could add more than 28,000 teachers.

The report, entitled The New Math on School Finance, was enabled by a new accounting standard adopted by the Governmental Accounting Standards Board (GASB), the body that sets accounting rules followed by all states and most localities.  The new rule, GASB Statement No. 77 on Tax Abatement Disclosures, requires most state and local governments to report annually on the amount of revenue they’ve lost to corporate tax abatements. The report also raises the issue of apparent non-compliance with the new accounting rule by school districts in many states.

The new rule is especially important for understanding school finance, because it requires the reporting of revenue losses even if they are suffered passively by one government body as the result of decisions made by another body of government. School boards rarely have input into abatement decisions made by city councils or county boards. Yet schools are often the most adversely affected when property tax abatements or other local tax breaks are granted.

“The numbers for Louisiana are astounding — even more so, in that local bodies are still under-reporting about $500 million in subsidies. As more school districts begin to comply with this new mandate, this report from Good Jobs First will become a treasure trove of hidden insight into how our government truly functions,” said Dianne Hanley, spokeswoman for Together Louisiana, a statewide coalition of faith communities and civic organizations.