A new report from Florida’s Office of Program Policy Analysis and Government Accountability found that nearly two-thirds (64%) of corporate subsidies went to companies already in the state, and another half went to large companies with over 1,000 employees, WFTV reported.

Good Jobs First Senior Research Analyst Kasia Tarczynska told WFTV the findings were consistent with findings from previous reports done by the non-profit organization. “We’ve seen across the county that large companies are the ones who benefit from those economic development incentive programs.”

Watch the full broadcast at WFTV. 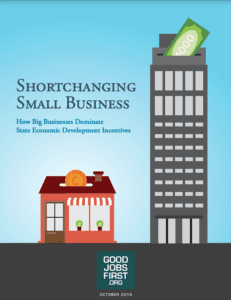