Skimming the Sales Tax: How Wal-Mart and Other Big Retailers (Legally) Keep A Cut of the Taxes We Pay on Everyday Purchases 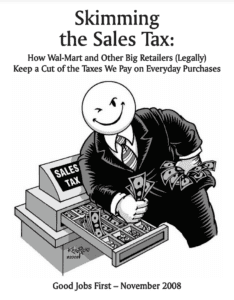 In this report Good Jobs First reveals that retailers in 26 states are being allowed to “skim” more than $1 billion a year as compensation for collecting sales taxes on behalf of state and local governments. The biggest impact is felt in the 13 of those states that put no ceiling on the amount of compensation any given retail company can receive, thus giving a windfall to the likes of Wal-Mart.