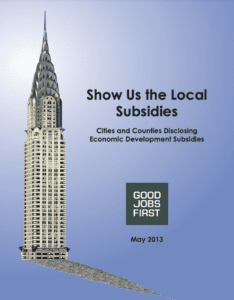 By Leigh McIlvaine and Philip Mattera with Greg LeRoy

Two-thirds of the economic development subsidy programs run by the nation’s largest cities and counties do not use the web to report which companies are receiving the tax breaks and other forms of financial assistance. Among the third of programs that do practice online transparency, most do so poorly, failing to disclose the dollar value of the subsidies. An even smaller number reveal key outcomes such as how many jobs were created. On the other hand, a few localities such as Memphis/Shelby County, Tennessee; New York City; Austin, Texas; and Chicago do a good job at disclosure.