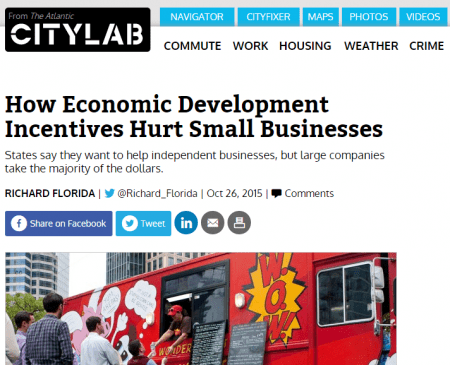 That’s apparently why our new study, Shortchanging Small Businesses: How Big Businesses Dominate State Economic Development Incentives , has gained such wide attention, especially in the business press and among small business groups. The study, funded by the Ewing Marion Kauffman Foundation and the Surdna Foundation, examined more than 4,200 incentive awards in 14 states and found that 70 percent of the deals and 90 percent of the dollars went to big businesses—even though the programs are facially open to companies of any size.

The study was covered on the Dow Jones news wire, at U.S. News & World Report, and twice at the International Business Times.  CNBC’s Scott Cohn wrote an excellent piece (“Study: State subsidies ignore the real job creators”) and also did a great segment (at the 11:30 mark) on NBR, the evening business show on PBS. The Washington Post ’s coverage even prompted Virginia’s commerce secretary to respond (with stock lines, to a Virginia newspaper as well).

Pulitzer prize-winning tax journalist David Cay Johnston sees the findings as a call to action (“Demand laws at every level of government requiring full and prompt disclosure…  Ask the candidates through their web pages. …And when candidates show up in your town organize people and go demanding full, prompt and transparent disclosure of [tax-break] gifts.”) Columnist David Sirota documented other forms of government bias against small business and pointed out that big businesses dominate campaign finance.  The DC bureau chief of the Business Journals chain wrote an article that got picked up in various outlets.

Creative-Class guru Dr. Richard Florida wrote in The Atlantic’s City Lab: “At the end of the day, the small-business incentives game appears to be just another smokescreen for states and localities to funnel public money to big businesses that—according to nearly every study on this subject—simply do not need the cash.” Prof. Kenneth Thomas, an international subsidy scholar whose estimates of total U.S. spending we regard as the most credible, published a terrific blog, noting that “the 16 programs considered in this report are all genuinely available to large and small firms alike; that is what makes this such an important study.”

Small business networks covered the study and broadcast it via social media. See, for example, the American Booksellers Association, the Institute on Local Self-Reliance, and Advocates for Independent Business all covered the report, as did Gaebler.com Resources for Entrepreneurs (here) and the California-based radio show “Critical Mass for Business.” The online magazine Shelterforce contrasted our findings with a a new study on community wealth building.

In state capitols and major cities where subsidy abuse is common, the study provoked some choice words.

The Kansas City Star editorialized, chastising Govs. Jay Nixon and Sam Brownback (“Small businesses in Kansas and Missouri deserve real help, not lip service”), reminding readers that the programs we studied are not only biased against small businesses; they are also used to pirate existing jobs back and forth across the state line instead of creating new jobs.

The study was covered in the Wichita Eagle, the Kansas City Business Journal and The Pitch.  The Wichita Eagle piece spurred an AP piece that ended up getting picked up widely in both print and radio inside and outside of Kansas: Kansas Public Radio, KUMW/NPR in Wichita, KCTV 5, WIBW 13 News, The Topeka Capital Journal, The Lawrence Journal World, and Kansas City Star.

On the eastern side of Missouri, the St. Louis Post-Dispatch columnist David Nicklaus covered the report in his Sunday column (“While big business gets subsidies, small business gets lip service”). A state legislator expressed outrage about the findings to KOLR-TV in Springfield.

Subsidies are a hot subject in North Carolina , where the study received lot of coverage. In the state capital, Raleigh News & Observer columnist Rob Christensen wrote: “Everybody loves small bidness. It’s right up there with Mom, iPhones and baseball. … The study found that North Carolina was not only part of the national trend – but it was leading the parade.”  The Winston-Salem Journal ran a detailed story, including state officials’ responses, and the Winston County Journal editorialized favorably about it. WECT-TV in Wilmington interviewed us and posted a solid story.

WRAL-TV in Raleigh-Durham did a piece (“Poor counties, small business largely left out of incentives”) building on a longstanding sore spot: the state’s rural western and eastern counties lack public investments. It forced state officials to defend their policies, and in a callous response, the commerce secretary even pooh-poohed the geographic fairness issue, saying: “That doesn’t make any sense. A job is a job is a job.” I suppose that’s true if you find a four-hour commute to Charlotte acceptable.

The Support Center, a statewide North Carolina Community Development Financial Institution (CDFI), wrote a thoughtful article about the study, saying it confirms past analyses the Center had published on the “critical gap in the allocation of economic development funds and resources when it comes to supporting small business development.”

In Florida , our study came out as the state legislature was debating giving the state’s privatized development agency a quarter-billion dollars for a “deal-closing” fund modeled on the notorious Texas Enterprise Fund (the agency was already under fire for lavish spending). The deal-closing idea was met with bipartisan skepticism, in part driven by the business community. A terrific article in the Tampa Bay Times summarized our study and cited the legislature’s chief economist as making the same argument. Jacksonville Florida Times-Union columnist Tonyaa Weathersbee did a very sympathetic column about the value of supporting small businesses because of their role in community revitalization.

Briefly, in other states:

Indiana : The Indianapolis Star covered the report and linked it to other criticisms the paper’s editorial board has had of economic development practices in Indiana. Public radio station WFHB in Bloomington/Nashville/Ellettsville also covered us.

Louisiana : WVUE-TV Fox in New Orleans, did a fine story and the Louisiana Budget Project featured our study in its Daily Dime newsletter.

New York : The study was covered by the Albany Business Journal.

If you know of other news media or groups that should hear about this research email tommy@goodjobsfirst.org

Good Jobs First will publish two more follow-up studies on fairness (or the lack thereof) to small business in the next few months, so stay tuned!