Shopping for Subsidies: How Wal-Mart Uses Taxpayer Money to Finance Its Never-Ending Growth 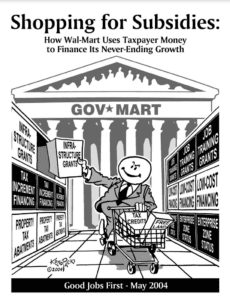 In this extensively researched study, we show that the giant retailer has received more than $1 billion in economic development subsidies from state and local governments across the country. Taxpayers have helped finance not only Wal-Mart stores, but also the company’s huge network of distribution centers, more than 90 percent of which have gotten subsidies. The report also includes policy proposals, including a prohibition on subsidies to big-box retailers except in distressed areas that are underserved by retail outlets (and in those cases the recipient of the subsidy should be required to pay a living wage).