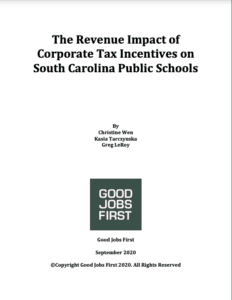 Public school districts in South Carolina suffered a sharp increase in lost tax revenue in FY 2019 due to corporate tax abatements: $423 million. This is $99 million, or 31 percent, more than two years earlier. Already-poor school districts lost the most: the six school districts that reported the biggest per-pupil revenue losses also have some of the highest student poverty; four of them have a Black plus Hispanic majority. The costly tax abatements are negotiated by South Carolina’s counties pursuant to state law. In this report, we present our findings on the programs, deals, and costs, and offer a menu of policy options to protect the state’s most foundational economic development investment–its public education system.