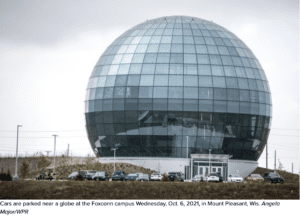 Wisconsin Recalibration with Foxconn is No Surprise, But Mt. Pleasant and Racine County Face the Biggest Fiscal Perils

“It has been apparent for a long time that a revised state agreement was coming, and that Foxconn was not going to suffer any real penalty for its egregious shortfalls. The new deal is downsized on jobs by 89 percent, and we disapprove of that new element tied to seven percent of workers’ wages. That rate means Foxconn employees will be ‘paying taxes to the boss,’ and a little more. (The state’s personal income tax bracket for the new jobs will be 6.27 percent.)

“But the real taxpayer victims here reside in the Village of Mt. Pleasant and Racine County. “As we argued more than two years ago, when Foxconn first acknowledged the project’s obvious failure: Wisconsin was never at risk on its tax credit awards because its payouts were ‘performance-based’ (i.e., backloaded and variable) and Foxconn wasn’t performing. But the opposite was true of the local subsidies: they were front-loaded and fixed.

“The only reasonable remedy? Then-chairman of Foxconn Terry Gao and then-President Donald Trump should have ensured that the two local governments were made whole. The Village and County have taken on almost a billion dollars of obligations for land parceling, a tax increment financing district, infrastructure including water and sewer and highways, and they have dislocated people from their homes using eminent domain.

“Although the state agreed in the original deal to cover 40 percent of any local debt shortfalls, no state dollars should ever be used for a such a purpose; that would create hidden additional costs for state taxpayers Foxconn should pay 100 percent of whatever costs the County and Village ever incur that are not covered by the remaining project.

“Let’s remember: at $4.8 billion, this was the biggest subsidy award to a foreign-based multinational corporation in U.S. history, and the third-richest of all time. It was also the first multi-state subsidy auction that a sitting U.S. president actively aided and abetted. It also benefited the sitting Speaker of the House of Representatives and a governor seeking re-election.

“I can’t think of a more politicized tax-break deal. And we always believed it would fail to materialize as promised because the business basics, like a supply chain for big-screen LCDs, were MIA.”