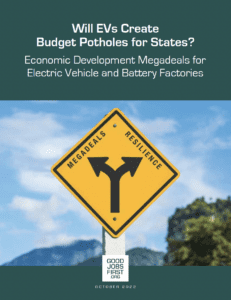 Washington, D.C. — In a megadeal spending spree like no other in U.S. history, states and localities have awarded more than $13.8 billion in economic development subsidies to at least 51 electric vehicle (EV) and EV battery factories, mostly in recent years.

That conservative tabulation omits at least 53 more projects for which subsidies have not yet been disclosed. And the costs of many of the 51 known deals are only partially known. Billions have gone to unproven companies, and six states have set all-time cost records for individual economic development projects.

These massive subsidies are unnecessary, because decades of federal and state investments and policies are driving a robust EV market surge. They amount to states taking credit for good news that is already unfolding.

Those are among the key findings in “Will EVs Create Budget Potholes for States?” a report issued today by the watchdog group Good Jobs First.

The big picture is clear: Big-spending states are likely creating — and sometimes obscuring — future “budget potholes” of subsidy commitments to an industry that will soon be shedding factory, maintenance, and sales jobs.

And some of the deals do not themselves even guarantee good jobs or other economic development ripple effects:

By contrast, in electric bus manufacturing, three companies (Gillig, BYD Motors and Proterra) have unionized factories and the largest bus builder, New Flyer, has a Community Benefits Agreement covering its factories in Alabama and California. Such agreements can improve both job quality and domestic content rates.

States and localities are able to spend so lavishly in part because of the half-trillion dollars in flexible grants they have received under provisions of the Coronavirus Aid, Relief, and Economic Security (CARES) Act and the American Rescue Plan Act (ARPA).

“States should spend those pandemic dollars broadly to make their economies more resilient against future recessions, pandemics and to equip workers for the big coming changes in auto jobs,” said LeRoy. “These megadeals are too many eggs in very few baskets.”

The study concludes with a detailed menu of federal, state and local policy options to better direct economic development funding, given EV realities. They include subsidy caps, pro-active identification of factories at risk of closure, retooling and retraining, and the use of public procurement powers to improve job quality and hiring diversity.