Putting State Pension Costs in Context: How They Compare to the Cost of Corporate Subsidies, Tax Breaks and Loopholes 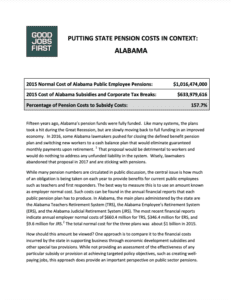 Public pensions are under assault throughout the United States. Led to believe that retirement costs for government workers are out of control, governors and legislators in numerous states have been moving to cut benefits and tighten eligibility requirements.

In a series of short papers, Good Jobs First seeks to put current pension costs (known as employer normal costs) into comparative context. Focusing on 13 states where pensions have been debated, we compare those costs to the amount of revenue those states lose each year as the result of economic development subsidies offered to corporations as well as the tax preferences and accounting loopholes (including offshore tax havens) used by companies.

As a matter of honest accounting and fair budgeting, state leaders should examine all forms of spending before they single out pensions or any other expense. Corporate tax breaks and loopholes are often poorly understood and little-noticed because they do not get debated and annually or bi-annually reauthorized the way appropriations do, nor do they often get sunsetted or audited. But over time, they add up to hundreds of millions, or even billions, of dollars per year.