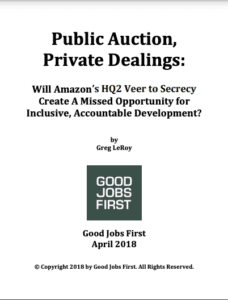 As Amazon.com conducts site visits at the 20 finalist locations for its second headquarters, or HQ2 project, little is known about most of those localities’ first-round bids. Almost nothing at all is known about six.  Billions of dollars are at stake, yet few states and cities have fully disclosed their bids. Even those that have partially disclosed have not revealed the details of their tax-break offers and their costs to taxpayers.