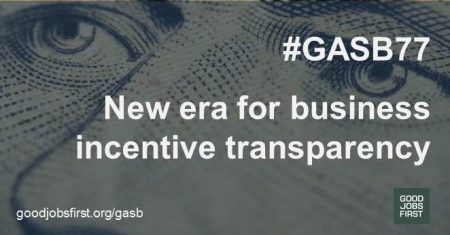 Washington, DC–For state and local budgets starting December 16, 2015 or later, most governments will have to disclose how much revenue they lose to corporate tax breaks given in the name of economic development.

That historic development was lauded today by Good Jobs First, a non-profit watchdog group that had long argued for such a rule and helped organize many comments on a draft of the new rule last winter.

Governmental Accounting Standards Board (GASB) Statement No. 77 on Tax Abatement Disclosures is the newest amendment to General Accepted Accounting Principles. GAAP is used by most states, cities, counties and school boards. Statement No. 77 was issued last August and covers public budgets starting tomorrow and beyond.

“In the history of incentive reform, it is no exaggeration to refer to Before 77 and After 77,” said GJF executive director Greg LeRoy. “When this new data starts flowing in 2017, we will finally have a price tag on corporate welfare like never before. Even bodies such as school boards that lose revenue passively will have to disclose their losses.”

Having helped win the new standard, Good Jobs First is now turning its attention to the states, where public officials need to begin preparing to comply and diverse activists are keen to access the data. A new Good Jobs First analysis of Statement No. 77 also recommends states consider surpassing GASB’s wording to improve the new data.

“Taxpayers, academics, journalists and non-profit research groups are soon to enjoy a whole new field of analysis never before possible,” said LeRoy. “We encourage anyone interested to read our analysis and get involved in Statement No. 77 compliance and data quality.”

State Tax Notes , the weekly of record on state tax policy, yesterday named Good Jobs First as one of two notable organizations of the year for 2015, citing especially the Statement No. 77 breakthrough.