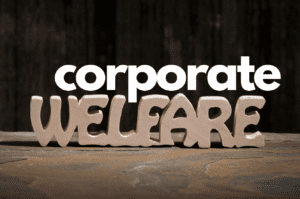 Corporate lobbyists have long blown a fog of fear, disinformation and confusion about public disclosure of corporate income tax credits.

It’s time to clear the air.

First, a definition: corporate income tax credits are dollar-for-dollar reductions in the amount of income tax a company pays to a state (or federal) government. A company can earn such credits by performing activities deemed to constitute economic development, such as making capital investments in new capacity, performing research and development, hiring new employees, and/or producing movies, TV shows, or commercials.

These credits are very costly; among economic development tax breaks, they are likely the fastest-growing revenue drain on state budgets over the past two decades. For example, one state gives a credit of 5 percent per year for 20 years for new capital investment. That is, if a company has enough taxable income, over time, the state will pay the entire cost of a new facility in foregone corporate income taxes.

Some states make these credits “refundable.” That is, if the credit exceeds what the company owes in taxes, the state pays the credit in cash to the company. Some other states’ tax credits are “transferable,” meaning they can be sold by the company earning them to other companies. Corporations and tax break “middle men” (who make money brokering these transactions) lobby for this because the credits are often so excessive (especially film and TV credits) that they far exceed the tax liability of the companies earning them.

So calling these credits a tax break is often a misnomer; they can be huge cash gifts.

Corporate lobbyists would have us believe that letting taxpayers see which company is getting these credits, and the dollar value of the credits, would somehow violate confidentiality or poison the “business climate.”

Nothing could be further from the truth. (Of course, we also need disclosure of outcomes: were the jobs created? How well do they pay? Do they have health care, paid leave, etc.?)

We offer two kinds of evidence: 1) almost every other costly economic development subsidy has been disclosed for decades; and 2) many states have been disclosing corporate income tax credits for years, and there is no evidence they suffered any “business climate” harm.

Second, regarding states that have been disclosing corporate income tax credits (naming the company, specifying the dollar value of the credit), just take a look at this quick sampling:

North Carolina –  William S. Lee tax credits (the program expired but still pays off) and Creating Jobs (Article 3J) (the credits are allowed against the franchise tax, the income tax, and the gross premiums  tax).

Bottom line: the amount of company-specific tax credit data online is large, diverse and growing. Anyone who claims it will violate confidentiality or hurt the business climate, well, that’s just so 20th century!