Local economic development departments are so eager to fertilize job creation in their communities that they often grow low-wage jobs that are detrimental to their economic landscape. Too often, localities (cities or counties) provide funding to employers that promise to create jobs but fail to ask: Will these positions be full-time? Pay minimum-wage or a living-wage? Provide any further benefits?

Money for Something report

, Good Jobs First found that 98 of 238 state economic development programs had a wage requirement but only 11 of these required wages above the existing market averages for the geographic area or industry sector. This same problem also persists at the local level.

The subsidizing of low wage jobs by local gove


. For example, DoubleTree Hotel, a hotel chain owned by Hilton Worldwide, received both a tax credit and a property tax abatement totaling $2,969,190 from the city of El Paso, Texas in 2006. The hotel promised to create 46 jobs in exchange for this subsidy, but these jobs paid an annual average salary of only $13,280. Although it is likely that many of these jobs are part-time positions, localities must reflect on the types of jobs that are produced from these economic incentives and how these employment opportunities impact members of their communities. 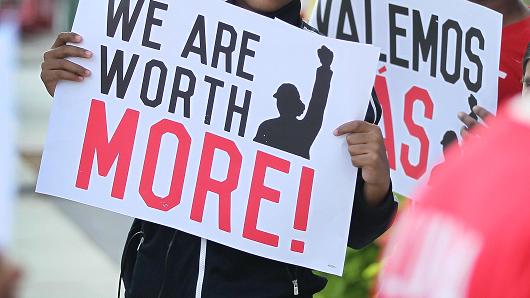 While an incentive given to a low-wage employer may be an isolated incident for some economic development departments, others systematically dole out large sums of public funds for poor jobs. Sampson County, North Carolina’s Grant Back Incentives Program issued 13 grants between 2007 and 2016 ranging in value from $18,787 to $3,278,966. The companies that received these grants paid their employees wages between $16,640 and $48,415 a year.   The 760 new jobs attributed to the grants had an average annual salary of only $32,350, which is nearly ten percent below the county's

Corporate giants are among the beneficiaries of the low-wage job creation. Wal-Mart, a frequent subsidiary recipient as documented by

, pays its full-time workers an average of

Giving incentives to low-wage employers is a problem for employees, taxpayers, and the communities. Employees are impacted by the lack of economic security that accompanies low-wage jobs. Despite often working full-time hours, many workers are still left to worry about how to pay their bills, feed their family on a dismal budget, and cover any unforeseen expenses that may arise. Many low-wage employees rely on social safety net programs such as SNAP (food stamps) and Medicaid, creating costs for taxpayers.

A broader effect of these incentive programs is deteriorating economic conditions within communities. By funding low-wage employers– especially those that provide wages below an area’s median income– local government are helping to lower living standards.

It does not have to be this way. Some local governments are using incentive programs to encourage the creation of good jobs. For instance, the

in Tucson, Arizona requires that companies create a minimum of 25 jobs with an average annual wage of $52,400, and that any jobs created beyond the original 25 positions must pay a minimum of $45,600 each year. This income requirement obligates employers to pay a middle-class wage to their employees. Additionally, the employer must cover at least 75% of each employee's health insurance premiums, above the approximately 70%

of premiums covered by employers. With these conditions, Tucson ensures that the companies receiving financial support from this economic development incentive provide good jobs to their employees, with fair pay and benefits.

Local governments, both at the city and county levels, must be cognizant of the types of jobs they support through subsidy programs. With

income inequality at its highest level since 1928

, localities must establish high standards that assist workers, taxpayers, and the community at large.