Know When to Fold ‘Em: Time to Walk Away from NYC’s “Corporate Retention” Game 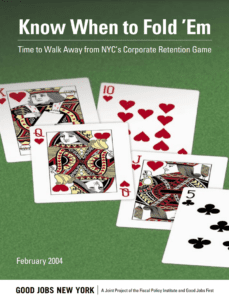 By Stephanie Greenwood and Bettina Damiani

Corporate retention deals negotiated by New York City in the 1990s failed to create jobs, despite their multimillion-dollar price tags, our investigation finds. Analyzing contracts never disclosed before between large firms and NYC, the report highlights thirteen outrageous deals. Some actually allowed companies to lay off as many as 20 percent of their employees with no penalty. Finally, the report highlights problems with the public reporting on these deals, citing differences between internal city documents and a mandated annual report. Following the release of this report, the NYC Industrial Development Agency announced several improvements to its decision-making process and to the corporate retention program as a whole.