JOIN US APRIL 13: Corporate Tax Breaks vs. Our Children’s Future

Corporate tax breaks cost public schools at least $2.37 billion in fiscal year 2019. Mark your calendars and join us tomorrow — Tuesday, April 13 — for a conversation on how we can get corporations to pay their share so our children thrive.

RSVP here (we’ll be live on Facebook) or Set a Reminder to watch us live on YouTube. 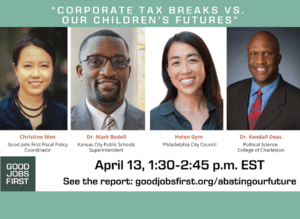 Philadelphia City Councilmember Helen Gym: No district in the U.S. lost more revenue to corporate tax abatements than the Philadelphia City School District – $112 million. Longtime public schools advocate Gym will talk about how that impacts students, and what we can do about it.

Kansas City Public Schools Superintendent Mark Bedell: He has been outspoken about the harms of corporate subsidies, using a new accounting rule to reveal the stark racial disparities born by students there. The district is pushing hard to center students in the discussions around economic development subsidies.

College of Charleston Professor Kendall Deas: No state lost more to corporate tax abatements in FY 2019 than South Carolina, draining more than $423 million, an astounding 31 percent increase from just two years prior. Deas saw how critical good schools were to economic development when he worked in the industry. “Great schools and good jobs go hand in hand,” he wrote in an Op-Ed in The State.

Good Jobs First Fiscal Policy Coordinator Christine Wen: Wen is lead author of “Abating Our Future: How Students Pay for Public Tax Breaks.” Her research found public school districts lost $2.37 billion to corporate tax abatements but that only included the 27 states that had meaningful data. She’ll recommend ways to get better compliance in the other 23, and how school boards can get control of their own fiscal affairs.

Submit questions in advance to Good Jobs First Executive Director Greg LeRoy at goodjobs@goodjobsfirst.org or pose them live at Facebook or YouTube.

We look forward to seeing you.

The report in the news: