“Not Your Grandparents’ Deal”

“Amazon continues to behave as we predicted it would, staging a public-relations stunt apparently to extract the largest possible subsidies from its chosen site. (See our article of three months ago.)

“This so-called short list is nothing of the sort. The 19 U.S. bids come from 15 metro areas that include 28 percent of the nation’s population, including nine of the ten largest metro areas. 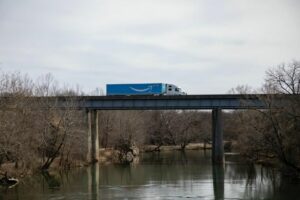 “That said, Amazon has performed a great public service by dragging the obscure site location process out of the shadows and into a harsh public spotlight. Many Americans are rightly aghast at what they see: a secretive process in which billions of taxpayer dollars are hastily offered to a large corporation with no public input. The HQ2 auction marks a new era in economic development, one in which people expect more transparency and accountability.

“More than 130 organizations have signed an open letter to Jeff Bezos demanding that Amazon abandon any plans to avoid paying its taxes and instead engage with community groups on specific benefit agreements to ensure that the HQ2 project does not impose higher taxes and displacing gentrification onto current residents. Good Jobs First signed this demand: no special tax breaks or subsidies for Amazon; instead the company should engage and agree to community benefits. (See the open letter here.)

“To the 20 localities named as remaining contenders, we say: fully disclose your bids right now and invite real public participation to revise them. Your residents need to know if your proposed deal is structured to help them benefit in any way and to shield them from gentrification.

“To the elected leaders of the 20 localities, we say: This is not your grandparents’ site location deal. You should cooperate and communicate freely with each other, to avoid overspending and to strengthen your bargaining hand. By Amazon’s choice, this is a public auction, so you should conduct this deal out in the open.

“To the 218 other bidding places, we say: fully disclose your bids; you have no credible pretense of being ‘in negotiations’ with Amazon, and never did. Any so-called non-disclosure agreements you cite were self-imposed, not from Amazon. Your future efforts will benefit from public analysis of your offers. (See bids disclosed to date at MuckRock.)

“We have said since Amazon announced this rare public auction that incentives will be somewhere between marginal to irrelevant in Amazon’s decision. That’s because all state and local taxes combined equal just 1.8 percent of the average company’s cost structure. It’s the other 98.2 percent of costs for business basics such as labor, occupancy, and other business inputs that almost always determine where companies expand or relocate.

“In this case, as in any large corporate headquarters siting, the key variable is the executive talent pool. For any company contemplating hiring 50,000 executives, the presence of other companies’ headquarters staff, along with strong university graduate programs in fields such as engineering, finance, law and marketing will be the most important issue.

“In addition to our skepticism about Amazon’s claim of 50,000 new jobs, we have also said that being able to access a metro area’s executive talent is also relevant, and for that reason named Atlanta as a weak candidate because of its poor transit system and low transit participation. (See our article from four months ago.)

“In addition to the marginal role of economic development incentives, we have emphasized other aspects of state taxation, such as apportionment formulas, that are often larger issues for determining actual corporate ROIs. There is also an important difference between automatic and discretionary incentives. (See our reporters’ tipsheet on that.)

“Saying that subsidies are marginal to irrelevant doesn’t mean Amazon won’t go to great lengths to get as many as it can. Indeed, since the creation of its own internal tax-break office in March 2012 with the hiring of Michael P. Grella, Amazon has gone on a tax-break binge. To date, it has received more than $1.1 billion in state and local subsidies, including at least 23 deals in 2017 alone. We are displeased that the company has become more secretive about the value of such deals since the release of our December 2016 study on them. (See our running tally of Amazon subsidies.)

“Amazon is merely the latest company to exploit America’s 80-year old site location system that has evolved to give companies all the power and ensure that public officials are helpless to protect taxpayer interests. The problem is especially acute for “megadeals,” where we estimate the average cost per job at $658,000, a level at which taxpayers will never break even. As we have twice written, there is a real risk that Amazon could obtain a negative income tax rate while also avoiding sales and property taxes. (See our December 2016 study on Amazon subsidies.) (See our megadeals database.) (See Chapters 2 and 3 here on site location history.)

“Even before the HQ2 auction was announced, we were calling on politicians to stop subsidizing Amazon and instead demand community benefits from its warehouse projects. (See our July 2017 article.)

“We hope news coverage will de-emphasize the ~1.8 percent of Amazon’s costs and focus instead on the 98.2 percent business basics, and the 100 percent necessity governments have to sustain public services and affordable housing that benefit all employers and working families. Journalists and taxpayers alike deserve full disclosure about the incentive bids; meaningful public participation is still possible.”