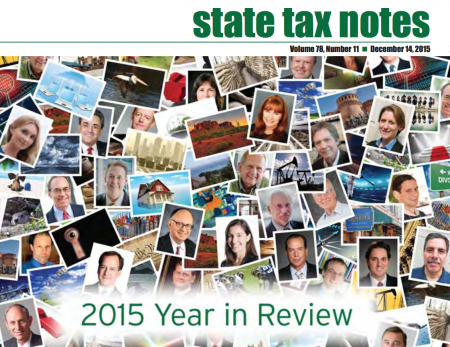 Washington, DC — State Tax Notes magazine this week honored Good Jobs First as one of two notable organizations of the year for 2015.

Citing last winter’s proposed new disclosure rule on economic development tax breaks from the Governmental Accounting Standards Board (GASB), STN wrote that “…Good Jobs First took the lead in pushing for the rules to be strengthened and approved. It rallied its supporters and like-minded organizations, coordinating a massive letter-writing campaign in support of the new standards.” Almost 300 comments were filed, STN noted, “far more than any other project launched in the last five years.” GASB Statement No. 77 takes effect on public budgets starting December 16 and later.

In a separate article (not available, behind paywall), STN also cited GASB Statement No. 77 as one of the most meaningful tax issues of 2015. “Although the final rules don’t do everything Good Jobs First and others had hoped, the effort was successful, and GASB approved the new rules in August, setting the stage for a wealth of new reporting and analysis on how expenditures will affect state and local budgets when the reports begin including the new information in 2017,” it reported.

“We are deeply honored to be recognized by the publication of record on state tax policy,” said Good Jobs First executive director Greg LeRoy. “STN’s opinions matter a great deal to everyone who cares about sound tax policies, including economic development tax expenditures.”

Two-thousand fifteen was the third year in a row that Good Jobs First has been recognized for its contributions to United States public policy.

In 2014, GIS Planning, Inc. and fDI Intelligence (a division of the Financial Times in London) gave LeRoy an Economic Development Leadership Award as “a recognized and committed leader in educating and informing decision makers and communities on the ‘truth’ of incentives based on in-depth research, case studies and white papers.”

In 2013, the U.S. Library of Congress notified Good Jobs First that the Library would begin permanently archiving the content of Good Jobs First’s website as a historically important public policy record.

This is the second time State Tax Notes has honored Good Jobs First: In 1999, it interviewed LeRoy for a series on people who had an impact on state tax policy during the 20th century.