Washington, DC — Good Jobs First today criticized Columbus, Ohio’s 2016 financial report for mischaracterizing some tax-break spending. While the City provides substantial information on economic development tax breaks, it fails to report all of them in one place, and to fully disclose foregone revenue, as it should under a new accounting rule, Good Jobs First contends. 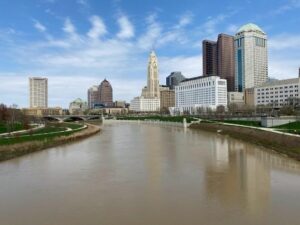 At issue is the definition of a “tax abatement,” as prescribed by the Governmental Accounting Standards Board (GASB) under its new Statement No. 77 on Tax Abatement Disclosures.

“When a government agrees to receive less tax revenue from a company in exchange for jobs or other community benefits, that is what we believe GASB calls a tax abatement,” said Greg LeRoy, executive director of Good Jobs First, the watchdog group that advocated for Statement No. 77. “For at least three programs, Columbus reports such transactions, but doesn’t report them as foregone revenue in its Statement No. 77 passage. If the City was given outside advice to do this, we hope it will take further consultations.”

In its 2016 Comprehensive Annual Financial Report (CAFR), on page 35, Columbus reports tax-rebate payments—tied to negotiated revenue losses—for its Downtown Office Incentive Agreements and its Job Growth Incentive Agreements. In both of these programs, in exchange for new jobs, the City agrees to rebate to companies up to 50 percent of the municipal income taxes paid by some of their employees. That quid pro quo, says Good Jobs First, is the crux of GASB’s definition of “tax abatement.”

“Columbus Auditor Hugh Dorrian has for years done an exemplary job disclosing economic development tax-break spending,” LeRoy emphasized. “Ours is a friendly criticism, hoping that other cities don’t also err this way. But Columbus is the state capital and Ohio’s largest city; if it sets a flawed example, other jurisdictions might avoid disclosure of tax abatements and undermine this landmark transparency reform.”

Concluded LeRoy: “GASB Statement No. 77 is a promising new tool for taxpayers to better understand government spending. Let’s get this right the first time!”

Columbus is the only the second big U.S. city to issue tax abatement data under the new Statement. (In a surprise, New York did so last September, a year early.) Over the next year, Good Jobs First projects that more than 50,000 local and state bodies of government will report tens of billions of dollars in previously unreported tax-break spending.