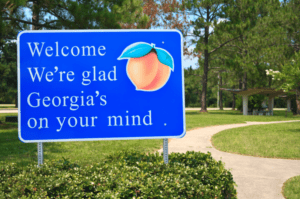 As states and localities finally start to disclose how much revenue they lose to corporate welfare (thanks to GASB Statement 77*), we continue to see laggards and leaders.

Today we spotlight Georgia (which has failed to comply, claiming taxpayer confidentiality for numbers that have long been public) and Bernalillo County, New Mexico (which has issued one of the best disclosures we’ve seen yet).

Already, 31 states have published their first GASB 77 data (reporting the amount of tax revenue they lose to each economic development tax abatement program), but no state has done it so poorly as Georgia.

Indeed, the Peach State stands alone in refusing to disclose its losses caused by subsidies. In its annual report , or CAFR, Georgia provides the required program descriptions for three major abatement programs. But then it gives no dollar figures, claiming taxpayer confidentiality:

The State is legally prohibited from providing more detailed information relating to the tax abatement programs and amounts abated. The restrictions from reporting confidential taxpayer information and other tax types are generally covered under O.C.G.A.48-7-60 and 48-2-15, respectively.

The Tax Expenditure Report price-tags hundreds of tax credit and abatement programs, both corporate and personal, and not just those for economic development. Wouldn’t the same taxpayer confidentiality rule block such disclosures? It simply looks like the state is defying Statement 77.

State Auditor Greg Griffin appears to have failed in his duties to ensure the state and its agencies comply with GASB’s Generally Accepted Accounting Principles by failing to challenge the State Accounting Office’s spurious claim of confidentiality.

We’ve occasionally seen claims of taxpayer confidentiality in other reports, usually when a program has a small number of beneficiaries. We see no justification for hiding the costs, even if disclosure means a given company’s tax break might be discernible.

Why? Because it’s one thing to protect taxpayer confidentiality when a company is required to report something to the government, such as its taxable income. But no one is forcing companies to take tax breaks; if they want to keep even their tax breaks secret, they should simply not accept them.

Besides, as we blogged eight years ago and have documented in 50-state “report card” studies, most states disclose oodles of company-specific tax-break records.

New Mexico’s Bernalillo County (which surrounds and includes Albuquerque) released a beautiful disclosure. Its GASB 77 abatement disclosure runs to 25 pages, the longest such Note, by far, of any CAFR we have yet examined. Each abatement deal gets a full-page, providing the name of the company, the expectations of the recipient and all of the governmental bodies that will suffer tax revenue losses as a result of the abatement (not just the county; other bodies are routinely affected—as many as 10—including the school district, the city, the community college, and the university hospital).

Credit for this outstanding disclosure template belongs to former State Auditor (and recently-elected Albuquerque Mayor) Tim Keller, who used his statutory power as Auditor (overseeing local government CAFRs) to mandate robust disclosure above and beyond the minimal standards set forth by GASB 77.

Bernalillo County taxpayers now know every business in their community that is receiving taxpayer assistance, and can engage in public debate on the merits. The leadership of former State Auditor Keller and his team sets the national standard for all state officials dedicated to transparency and accountability.

Of course, contrary to the “business climate” claims of those who still defend tax-break secrecy, the sky didn’t fall in New Mexico after this disclosure. The same has been true since 1999 , when Ohio first disclosed hundreds of deals online.

Have You Looked Up Your GASB 77 Data Yet?

Good Jobs First has uploaded GASB 77 data from more than 1,000 local and state governments at our new Subsidy Tracker 2 database. We believe that about 50,000 governments nationwide are due to report, mostly in early 2018.

If you’d like to see our running commentary on this landmark breakthrough in public finance and economic development accountability, see our writings here.

*For those still unfamiliar with GASB Statement 77 on Tax Abatement Disclosures, here is our intro page.