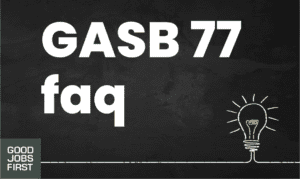 The Governmental Accounting Standards Board (GASB) issued Statement No. 77 on August 14, 2015. That means all state and local budgets starting after December 15, 2015 and conforming to Generally Accepted Accounting Principles (GAAP) began reporting on their revenues lost to corporate subsidies.

This was a historic shift: for the first time ever, state and local governments—including school districts that lose revenue passively—included the costs of subsidies given to companies in the name of economic development. Good Jobs First has found billions in such revenue diverted, and continues to advocate for greater compliance by all states.

Why is GASB 77 important?

Never since its founding in 1984 has GASB issued standards specifically addressing the estimated $70 billion per year states and cities spend each year in the name of jobs. Tax breaks for economic development are by far the costliest job subsidies and also the least well disclosed. So GASB’s development of standards to cover reporting of these business tax breaks is truly a landmark event.

GASB sets rules that accountants, auditors, and other finance professionals follow when they prepare financial reports. GASB’s rules are known as Generally Accepted Accounting Principles (GAAP, see more below). Because most state and local governments conform to GAAP, this new standard will have huge ramifications.

Disclosure of tax abatement revenue losses will also enable progressive activists and academics to explore the relationship between high spending on tax breaks and low credit ratings. That, in turn could make Statement No. 77 data a new diagnostic variable for the credit ratings agencies, and thereby help the credit markets impose more restraint on such loose spending.

What does GASB 77 have to do with inequality?

Equitable access to good public services is a fundamental element of debate in America about opportunity, mobility and civil rights. Whether one is fighting for equitable and adequate funding for K-12, affordable tuition for public colleges and universities, broadening access to affordable healthcare, maintaining public transit service, ensuring good police and fire response times, or maintaining roads, water, sewage and other infrastructure—everything depends on a fair and sufficient tax revenue base.

Yet the $70+ billion spent for economic development are too often treated as a corporate entitlement: compared to so-called “on budget” spending, such tax breaks are more likely to elude normal budget scrutiny and are less likely to be audited or sunsetted. Some states even claim that taxpayer confidentiality precludes company-specific disclosure of income tax credits or rebates.

This is why Statement No. 77 is such a breakthrough against inequality: it will for the first time enable taxpayers and policymakers to quantify and compare the revenue losses caused by economic development tax breaks on the majority of states and localities.

For the first time, it will be possible to widely test the economic development axiom that “the poor pay more.” That is, do central cities and inner-ring suburbs, who can least afford it, spend the most to compensate for their perceived “business climate” disadvantages (i.e., schools, crime, brownfields)?

Significantly for school districts, Statement No. 77 also says that if a government body loses revenue passively, as the result of another government body’s actions, the passive loser must compute and report its total annual loss. That scenario fits school districts, which in most states cannot control the tax-break behavior of cities or counties, even though schools lose the most (to property tax abatements, tax increment financing districts, etc.).

For those of us who believe that under-funded schools and other public goods are not just drivers of racialized inequality but also real deterrents to true economic development, having this cost data will be an enormously powerful tool.

How much more will we learn about subsidy spending?

Far more than we know now, but not nearly as much as we’d like.

Because GASB has never ventured into tax expenditures for economic development before, what we have now is the Wild West: a great deal of data of very uneven quantity and quality from some state and local governments. Some jurisdictions have good aggregate disclosure (usually through tax expenditure budgets), some have good disclosure of individual awards (including recipient names and other details we capture for our Subsidy Tracker database) and some do well by both measures, while some do poorly on both.

The new GASB standard ensures that every GAAP-compliant jurisdiction discloses (in its financial statements) at least the aggregate revenue lost to each of its economic development tax-based subsidy programs. It also requires government bodies that lose revenue due to the action of other public bodies to report such losses (think school boards losing property tax revenue due to property tax abatements or tax increment financing granted by city councils or county boards).

How did GASB 77 come about?

2008: GASB begins to explore the issue of tax abatement disclosure.

Early 2012: GASB begins to investigate the need for disclosure guidance for governments that have granted tax abatements.

2012 through August 2014: GASB combines staff research with outside commissioned research and debates the issue during numerous meetings, drafting initial recommendations.

November 1, 2014 through January 29, 2015: GASB opens one 90-day comment period to collect, evaluate, and incorporate feedback on its proposed new rules for disclosure of tax abatements. No hearings were held. Nearly 300 comments were submitted on the draft standards released by GASB in October 2014. An archive of those comments can be found here.  Good Jobs First commented on January 21, 2015, January 30, 2015, and June 24, 2015 (with others).

March through June 2015: GASB re-deliberates the standard, per the comments it receives.

July 2015: GASB reviews its final draft of Statement No. 77 (as an amendment to Generally Accepted Accounting Principles)

December 15, 2015: Budgets that occur after this date are covered by the new Standard (i.e., budgets that start in calendar 2016). Governments are free to comply earlier, as soon as the final Standard is issued.

2017: First year in which large numbers of Comprehensive Annual Financial Reports or audited financial statements will be published (for the prior year) with Statement No. 77 data in them, triggering a new era of analysis and reform.

GASB, or Governmental Accounting Standards Board, is the professional organization that establishes and improves standards of accounting and financial reporting for U.S. state and local governments. Founded in 1984, the organization is funded by accounting support fees established under the Dodd-Frank Wall Street Reform and Consumer Protection Act. GASB’s seven-member board is composed of finance and accounting professionals and academics with extensive public sector accounting experience. Click here for more information about the organization.

GASB’s rules are known as Generally Accepted Accounting Principles, or GAAP, and most units of government choose to conform to GAAP in order to get credit ratings to sell bonds. Click here for a GASB paper estimating the degree of GAAP compliance among states and localities.

GASB is not a government entity and its rules are not legislation, but as we detail below, GAAP has the force of law in many states and localities. GASB is technically an “operating component” of the independent, nonprofit Financial Accounting Foundation (FAF). A sister component of FAF, the Financial Accounting Standards Board, or FASB, plays the same role for private-sector accounting, including publicly traded corporations as they report to shareholders.

All of which is to say: GASB and FASB are foundational to the integrity of the U.S. financial system, protecting taxpayers, investors and consumers every day by promoting financial records that are complete, uniform and comparable.

Which government budgets are covered by GAAP?

The vast majority of states and also of localities (about three-fourths of all and a higher rate of large jurisdictions) conform their financial reporting and accounting practices to GAAP issued by GASB. Local government bodies include cities, counties, school districts, townships, villages and other local taxing entities. Three-quarters of the states legally mandate the use of GAAP for some local bodies. GASB is recognized as the official source of government accounting standards by the accounting industry, capital markets, and governments themselves.

Before GASB 77, what did GAAP say about “tax abatements”?

Nothing. While the majority of states now publish tax expenditure budgets of varying quality, there were no GAAP specifically covering how government financial reports account for economic development tax abatements. Even though they spend an estimated $70 billion per year on economic development, most of it in foregone tax revenue, state and local governments were not required to disclose any specific kind of information related to tax abatements under GAAP.

Given that lack of standard reporting practice for tax abatements, the quality of financial disclosure of this information varies widely. Many states and localities fail to account for abatements entirely. Much of what passes for abatement disclosure is actually forecasted estimates of foregone revenues for budgeting purposes, not actual accounting. For this reason, policymakers and academics have never been able to state with precision the real cost—or cost trend—of economic development subsidies to state and local governments. We believe the most credible national estimate is $70 billion annually (by Prof. Kenneth Thomas – see our staff page), but that figure was for 2006, and we believe it is conservative.

Why Did GASB Develop GAAP for Tax Abatements?

GASB does not disclose its reasoning for taking up a particular issue. But to commission research and even consider rule-making, the Board must agree that an issue is broadly prevalent and has considerable financial magnitude to governments. We do know that the rising costs of economic development tax expenditures have prompted debates within government finance circles for many years, even as far back as the late 1980s within the Government Finance Officers Association, which convened a task force on the issue.

Finally, GASB noted in the Exposure Draft that one of its longstanding accounting principles considers whether tax revenues are sufficient to pay for current-year obligations and whether future taxpayers are effectively paying today’s bills. Therefore, tax abatements that reduce revenue are relevant to those issues (paragraph B19).

Can you clarify the various terminologies (subsidies, abatements, etc.)?

At Good Jobs First, we refer to economic development expenditures of any structure as “subsidies.” We call tax-based incentives awarded to businesses as tax subsidies or tax breaks. We have historically used the term “abatement” to refer specifically to property tax exemptions or reductions, but GASB uses this term broadly. GASB defines a tax abatement as “a reduction of or exemption from taxes, offered by a government to a specific taxpayer, typically for the purpose of spurring economic development [or other public benefits].”

You’re in luck. Find it here.

You’re in luck. View it below or find it online here.