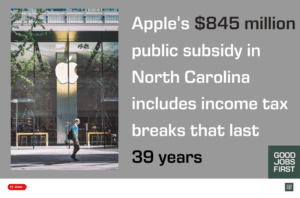 It’s the most bizarre-looking giveaway: despite an economy roaring back from the pandemic recession, North Carolina just awarded $845 million to Apple for a Research Triangle campus. Less than a year ago, the state also awarded $450 million to Centene Corp. for a regional headquarters in Charlotte.

It’s not just the Tarheel State: Kansas City just approved a subsidy deal worth $8.2 billion (yes, that’s a “b”) for Golden Plains Technology Park, which will include data centers that typically employ only dozens of workers. New York State and the town of Alabama recently awarded $269 million to Plug Power for a hydrogen production facility.

Even in the years leading up to pandemic-plagued 2020, when the U.S. economy set records for sustained job growth, states and cities were eager to give away their financial futures chasing deals like Amazon HQ2, Foxconn and Tesla.

It makes no sense: politicians just keep giving away the store, oblivious to economic realities. Why? Because they inhabit a rigged system that strips them of their ability to act as rational market participants.

This dogma dictates: governments must never cooperate with each other, at the peril of being blacklisted next time. And they must never let the public in on the big, dirty secret: incentives rarely determine where companies choose to locate, because state and local taxes are such microscopic cost factors in those decisions.

This bargaining asymmetry has been exacerbated by the long-term decline, since the late 1990s, in new business start-ups. That means fewer “gazelles,” or young, high-growth companies that have historically provided big shares of net job growth. Scholars debate why, but it is empirically agreed—and economic development statistics like those published by Site Selection magazine confirm— there are fewer deals for which states and cities can compete.

So for a long time, we’ve had a smaller supply of deals plus higher demand (those politicians trained to go “buffalo hunting” with mega-bucks). That’s a formula for grotesque public waste.

In raw power-dynamics: large, prominent companies like Apple have even more disproportionate bargaining power to extract excessive subsidies. In the North Carolina case, CEO Tim Cook sent signals, even choosing Austin, Texas for a campus that could have gone to the Research Triangle. The state legislature took the hint, extending a subsidy program in which future Apple employees will effectively pay some of their state income taxes to Apple (not a typo; they will pay taxes to their boss ) for 39 years .

This profound policy bias in favor of corporate megafauna is one contributing factor to the struggles of American entrepreneurs. Indeed, our research shows that—even when programs are open to companies of any size—about 70 percent of the deals and 90 percent of subsidy dollars go to large, multistate, even multinational companies. Small business owners see this problem clearly: in one national survey, 91 percent of them endorsed capping subsidies to big businesses.

Uncle Sam has been chronically MIA on this “second war among the states” (as Business Week dubbedit… in 1976). But the Biden administration and Congress are sending new signals for restraint. The American Relief Plan says that if a state enacts new tax breaks that reduce overall revenues, it will lose the same amount of Relief Plan funding.

Washington should take the next step. Federal funding “strings” in the 1980s got states to raise their legal drinking ages to 21, and again more recently to reform their Unemployment Insurance systems to cover more workers in the Great Recession.

We need the same federal carrot to deter megadeals. In the pending American Jobs Plan, to protect federal taxpayer dollars and ensure maximum benefit to working families, Congress and the White House should explicitly say that 10 percent of those funds allocated to road and bridge repairs will be held back from any state until its governor agrees in writing to a few common-sense safeguards.

First: no new giveaway programs and no new company-specific deals worth more than $10 million or $10,000 per permanent, full-time job, whichever is lowest. Second: no use of state resources for direct luring of jobs from other states: no mailers, no billboards, no crass stunts like those by then-Texas Gov. Rick Perry back in 2013. Third, building on many excellent state precedents: robust online disclosure of the costs and benefits of every incentive deal, every year, for the duration of the tax breaks.

Let’s create a national climate to help governors and mayors break out of their passive prisoners’ dilemma cells, forget about buffalo hunting, and apply their economic development energy where it’s most desperately needed: to our small, local, and entrepreneurial employers.