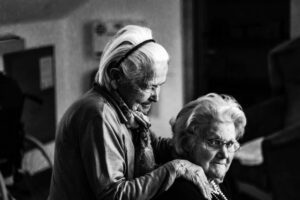 It was only a few days ago that the Centers for Medicare and Medicaid Services announced that nursing homes will be required to notify residents and their families when coronavirus cases have been discovered in a facility. This comes many weeks after the Life Care Center in Kirkland, Washington became an early Covid-19 hotspot and deaths started mounting at other nursing homes across the country.

Even before the pandemic began, conditions in the nation’s roughly 15,000 nursing homes, which house some 1.5 million residents, were far from ideal. As a Washington Post investigation recently found, about 40 percent of nursing homes with publicly reported cases of coronavirus (a list which is far from complete, given varying transparency practices among the states) had been previously cited by government inspectors for violating regulations meant to control the spread of infections. This made them all the more susceptible to coronavirus.

The blame for that poor track record rests to a significant degree with the large corporations, including private equity firms, that control a substantial portion of the country’s nursing homes. While the Washington Post story did not identify the parent companies of the facilities with reported Covid-19 cases, the data in Violation Tracker shows the compliance problems at those corporations.

The nursing home chain with the largest amount of total penalties is Kindred Healthcare, which has had to pay out more than $350 million in fines and settlements.  The bulk of that amount has come from cases in which Kindred and its subsidiaries were accused of violating the False Claims Act by submitting inaccurate or improper bills to Medicare and Medicaid. Another $40 million has come from wage and hour fines and settlements.

Kindred has also been fined more than $4 million for deficiencies in its operations. This includes more than $3 million it paid to settle a case brought by the Kentucky Attorney General over issues such as “untreated or delayed treatment of infections leading to sepsis.”

Golden Living Centers, a large chain owned by the private equity firm Fillmore Capital Partners, accounts for more than $200 million in fines and settlements. Golden Living is the current incarnation of Beverly Enterprises, which in the 1990s was the poster child of nursing home misconduct. In 2000 it paid $170 million to settle allegations that it defrauded Medicare by fabricating records to make it appear that nurses were devoting much more time to patients than they actually were.

Golden Living and Beverly have also paid more than $6 million in fines emerging inspections of their facilities, including $1.5 million paid to the Arkansas Attorney General to resolve allegations of patient neglect.

Another chain with a problematic track record is Life Care Centers of America, operator of the ill-fated facility in Kirkland. The company has paid more than $147 million in fines and settlements, most of which came from a False Claims Act case in which it was accused of improperly billing Medicare for rehabilitation services.

The company has also paid more than $2 million in fines stemming from inspections, including $467,985 for nursing homes in Washington State. Life Care facilities appear numerous times on the Washington Post list of facilities with reported coronavirus cases.

Among the many problems that have been brought into sharp relief by Covid-19 — and that will have to be addressed once we have gotten through the pandemic – is the sorry state of our nursing homes, too many of which seem to put profit ahead of safety for one of the most vulnerable parts of our population.