Birmingham Goes Above and Beyond New Economic Subsidy Reporting Rules 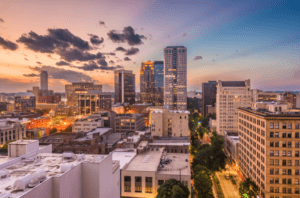 Birmingham, Alabama set a positive example last winter when it exceeded a new accounting rule and disclosed far more tax-break information than is required under GASB Statement No. 77*. The biggest city in a free-spending state that has been notoriously opaque, it named company names, disclosed the number of tax-break deals, and even projected future-year revenue losses—and it did all that a year early !

Thanks to GASB’s new Statement No. 77, an estimated 50,000 local governments must for the first time this year disclose the amount of tax revenue they’ve lost to tax abatements, as well as the cost of infrastructure improvements tied to specific abatement deals. But the rule is crude: governments only have to disclose one dollar figure for each tax-break program per year.

Exceeding those reporting requirements, a year before it was required to, Birmingham provided the names of companies expected to receive more than $1 million of taxpayer support, detailed the costs of each big deal, and also reported the anticipated future cost of its subsidy agreements—none of which is required by GASB.

“Birmingham, like New York which also reported early, has shown that shining a light on economic development tax breaks is neither onerous nor a business climate impediment,” said Scott Klinger, Good Jobs First’s GASB 77 Activation Coordinator. “In a state that still fails to disclose some tax-break costs, Birmingham has set a standard we hope other cities everywhere will seek to match,” Klinger added.

The city reported FY16 expenses of $5.9 million in tax rebates made as a part of economic development agreements, and it projected that those agreements will cost an additional $85 million in foregone city revenue over their duration. The city lists the names of nine individual businesses and one group of businesses (new car dealer franchisees) along with the taxes rebated to each, and how much additional tax revenue is likely to be rebated in the years to come. Trinity Medical received $2.5 million in tax rebates, leading the list of 2016 subsidy recipients.

The new accounting rule also requires governments to report how much tax revenue they lost passively as a result of the actions of other bodies of government. This rule is particularly important for school districts, whose finances are often impaired by tax abatement decisions made by cities or counties, with no school board say.

Although it cautioned that its passive-loss reporting might not be reliable (for reasons not stated), Birmingham said it lost $4.7 million in revenue to tax abatements granted by two city bodies: the Downtown Redevelopment Authority and the Industrial Development Board. Sixty-two businesses—all named with dollar amounts and abatement schedules—received subsidies from these agencies. Oxmoor Center LLC received the largest tax abatement in 2016, of more than $1.2 million. We hope that Birmingham extends its transparency leadership further in its 2017 report by taking the steps necessary to verify abatement data provided by third-parties, such that caveats about the data’s accuracy are no longer necessary.

*For those still unfamiliar with the Governmental Accounting Standards Board (GASB) and its Statement No. 77 on Tax Abatement Disclosures, here is Good Jobs First’s explanation: https://goodjobsfirst.org/gasb-statement-no-77