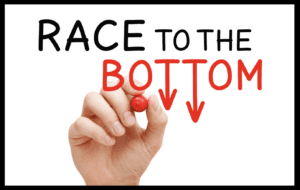 Plus: School champions tackle the impact of corporate tax breaks on education

This is Arlene at Good Jobs First with lots of news. We led a coalition calling on the Treasury Department to enforce a Rescue Plan provision encouraging states to put a moratorium on new economic development incentives. We released two major reports, including one on school funding, and we’re proud to be part of a distinguished group talking about ways to unrig the corporate tax code. Let’s dive in.

But first, mark your calendars for April 13 at 1:30 p.m. EST for a panel discussion , “Corporate Tax Breaks versus Our Children’s Futures.” Four experts will join us to talk about the ways corporate tax abatements harm public schools (our recent report found schools lost $2.4 billion to them in fiscal year 2019), and what we can do about it. More below.

Inside the $1.9 trillion American Rescue Plan was a key provision that offered exciting possibilities to those of us long pushing for better use of public money in economic development. It says that for every $1 in tax cuts a state doles out, it loses $1 from what it is supposed to get in ARP federal aid.

This provision, a way of making sure the money is used to keep people off the streets, help schools reopen and ensure small, local businesses stay afloat, expires at the end of 2024.

The Treasury Department hasn’t released final rules around it, but a group (including Good Jobs First) argues the provision clearly applies to localities and economic development incentives. Last week, we sent a letter to the Treasury Department explaining why that makes sense and the historical precedent of federal money that comes with strings (like how in the 1980s federal highway dollars were withheld from states until they raised their drinking age to 21).

As Georgetown University Law Professor David Super well explained in the Washington Post : “ The logic is straightforward: If a state has sufficient revenue that it can afford a tax cut, it does not need more federal money.”

Let’s use this pause to reconsider the use of subsidies in economic development so that profitable, well-established companies and developers don’t remain the biggest winners. 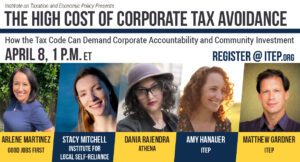 Speaking of corporations, Good Jobs First is participating in a panel discussion on ways to unrig the corporate tax code to create an economy that works for everyone.

The Institute on Taxation and Economic Policy is hosting the panel, which includes Stacy Mitchell of the Institute for Local Self-Reliance (a nonprofit pushing for an economy driven by local priorities) Dania Rajendra of Athena (a coalition working to end Amazon’s destructive, jobs crushing monopoly) and Arlene Martínez of Good Jobs First (that’s me).

ITEP’s Matthew Gardner and Amy Hanauer will open things up with a presentation that includes findings from their new report , which showed 55 large and highly profitable companies failed to pay a single dollar in 2020 federal corporate income taxes. Come on .

Our recent study, Abating Our Future , found corporate tax abatements cost public schools nearly $2.4 billion across the United States. And that’s only what we could track down among the 27 states that have any real data.

But there are ways to change this, and we’re excited to be hosting a panel discussion on April 13 to talk about safeguards. We’ll be joined by:

The report in the news: