A Better Deal for the District: Enhancing Economic Development Transparency and Accountability in Washington, DC 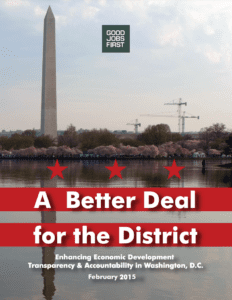 The District of Columbia has embraced four best-practice economic development policies (local hiring, fiscal impact analyses, the debt cap, and a Unified Economic Development Budget or UEDB), but it remains behind on many basic accountability standards relative to nearby jurisdictions.

This report seeks to show how the District can build upon its past progress by disclosing the details of subsidy projects in an online database, requiring strong job creation and quality standards, and recapturing subsidies when recipients underperform.