Amazon Has Squeezed Over $5.1 Billion from U.S. States and Localities 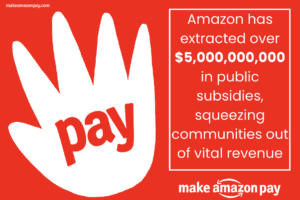 Washington, DC — Amazon.com, Inc. has squeezed more than $5.1 billion from U.S. states and localities in economic development subsidies. This is according to subsidy watchdog Good Jobs First, which posted recent tax-break data at its Amazon Tracker database documenting hundreds of incentive deals given to the retail giant.

Amazon has also continued to reap subsidies around the world, as first documented by Good Jobs First last February. While the costs of those non-U.S. deals are less-well disclosed, Good Jobs First noted likely new subsidies since February given to the company in Germany, Sweden, and the United Kingdom.

Most of the U.S. subsidy packages are for warehouses, even though Amazon’s rapid-delivery Prime business model compels it to build hundreds of such facilities close to affluent communities. Amazon also recently announced it will lay off thousands of workers and cancel some of its distribution expansion plans, admitting it overbuilt. While the company has failed to sign its first collective bargaining agreement with warehouse workers who have voted to unionize, Amazon founder Jeff Bezos is scrubbing his image with charitable-giving announcements.

“Governments are wasting huge sums subsidizing Amazon even as the pandemic drove record growth for the company, and repeated exposés have shown the deplorable working conditions of its warehouse workers and the power it has to drive small businesses out of the marketplace,” said Good Jobs First Senior Research Analyst Kasia Tarczynska, who maintains Amazon Tracker. “Amazon must stop squeezing communities.”

Within the last two years:

Instead of Amazon squeezing workers, the company should pay living wages and stop its aggressive, even illegal responses to organizing efforts.

Instead of squeezing the planet – its carbon dioxide emissions in 2021 were the equivalent of 180 gas-powered plants, the Verge reported – Amazon must work to take meaningful action on climate change.

And instead of squeezing communities for every dime, Amazon should pay them when it arrives, for roads, schools, parks, environmental mitigation and everything else other residents and other businesses already pay for.

Bottom line: Instead of celebrating a man’s dubious pledge to cherry-pick charitable causes, let’s work to build an economy that properly rewards workers and their support systems for the riches they create and enable.

🗺️ : In our Mapping Amazon project, we show you that company site selection decisions are based on business basics: proximity to major highways, ports, railways and near clusters of Prime customers.

📦: Good Jobs First revealed that Amazon built at least 171 of its warehouses in “Opportunity Zones” where wealthy investors can reduce and avoid capital-gains tax.

🎙️: Our executive director Greg LeRoy talked to Fairness & Accuracy in Reporting (FAIR) about why Amazon’s extreme tax avoidance strategies are so detrimental to communities.

🌏: Good Jobs First Research Fellow Kenneth Thomas wrote about the company’s global efforts to secure subsidies no matter the country. “In its quest for global dominance of retail, Amazon drives out its competitors, its workplaces have higher-than-normal injury rates, and its operations pollute low-income neighborhoods. Undermining local retail economies, it strips communities of badly needed revenue to pay for their schools, health care and infrastructure,” Thomas writes. “Governments worldwide are helping Amazon do this.”

Not to mention Jeff Bezos' Amazon has been built on tax avoidance: sales taxes, corporate income taxes, property taxes, any other tax.
And extraction: he demands billions of dollars from communities, as our Amazon Tracker has documented: https://t.co/LwdHiHzN7f #CorporateWelfare https://t.co/EaSINhXjMm pic.twitter.com/tWyx6qQwwR