We Must End the Economic War among the States. Here’s How, Urges Watchdog 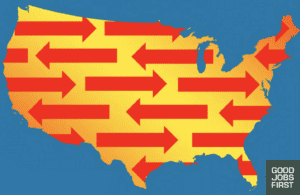 Greg LeRoy, GJF’s executive director, said it issued the strategy because it has received so many inquiries from public officials and concerned citizens outraged by the public auction staged by Amazon.com for its second headquarters, or HQ2 project. The strategy is online at GJF’s website.

The recent auction… has rightly outraged many Americans. How is it, many ask, that a company valued at almost $1 trillion and led by the world’s richest person could be allowed to stage a public relations blitz that caused hundreds of politicians— Democrats and Republicans alike—to publicly grovel, many of them offering undisclosed, multibillion-dollar subsidy packages?

The truth is, such auctions happen hundreds of times per year, though to be sure the HQ2 trophy deal was exceptional for its size. But mainly it was unusual for being public… No matter why it happened, it is objectively true that the Amazon HQ2 auction has created a powerfully teachable moment in how the U.S. tax break-industrial complex works. [ Read the proposal]

…The other fresh textbook we have now is the faltering Foxconn deal in Wisconsin. Call it the failed “Trump Effect.” Never before has a president weighed in for or against the “economic war among the states.” [ Read the proposal]

Most of the American public did not previously understand how corporate-dominated our nation’s economic development system is: how incentive bids are negotiated secretly, how many cities outsource recruitment functions to Chambers of Commerce (which can mean that records will never be disclosed), how constrained public officials are (in the “prisoners’ dilemma”) from cooperating with each other, and how long-standing secretive norms make it impossible for community groups to have any meaningful input at the critical formative stages of a deal. And they had no idea now irrelevant subsidies are to companies’ site location decisions until Amazon didn’t choose [many bids worth far more than Northern Virginia’s or the aborted one from New York]…