Thanks to an accounting rule Good Jobs First helped get implemented, we can begin to see how much revenue communities lose to corporate tax breaks. Good Jobs First’s Project Coordinator Amy Rose and Jacob Bundrick, a lecturer of economics at the University of Central Arkansas and an affiliated scholar with the Arkansas Center for Research in Economics, used the data (Financial Statement No. 77, found in end-0f-year spending reports) to begin to price tag the costs of corporate tax breaks in Little Rock. 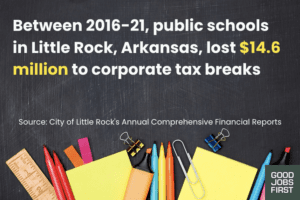 “Earlier this year, the Little Rock School District agreed to raise starting salaries for teachers. The raises were contingent upon available funding, and they were ultimately put on hold after school officials determined that they couldn’t afford the increases.

Teachers were told the district had lower-than-expected tax revenue. Partly, the shortfall was caused by declining enrollment, which means less state aid, and officials cited operational changes as well.

But there’s another reason Little Rock School revenues are down, through no fault or choice of their own: economic development tax abatements given to corporations. Tax abatements often impact school districts the most, though they typically have the least say in the matter.

In fiscal year 2021, the school district lost out on $2.3 million in potential revenue due to those subsidies. That amounts to nearly $1,450 per teacher.”

Read the full story at the Arkansas Democrat-Gazette.