The other night, while scrolling Netflix for something to watch, I settled on “Don’t Look Up,” a dreadful but entertaining cautionary tale that uses an earth-destroying meteor as a proxy for climate change. I’m one of those who waits for the ending credits to see where a movie was made. This one was shot in Massachusetts, with Boston standing in as New York City. I instantly thought – how much in subsidies did this movie get? But I know the answer, because it’s almost always the same: I cannot tell and won’t be able to find out for another couple of years. Here is why:

Movie-makers – especially ones backed by large studios – get quite a lot of public money: more than 30 states offer film and TV production subsidies. Many of those programs are structured as “tax credits” which are equal to a percentage of the company’s spending in a state. For example, the Massachusetts program is a 25% credit, so if a production company spends $20 million there while making a movie, it will get a “tax credit” worth $5 million. 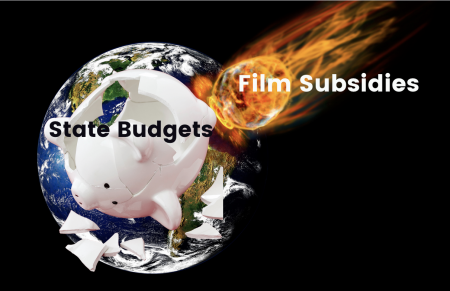 These media credits tend to be “refundable” or “transferable.” That means that a state will write a check to the film producer equal to the credit, or that the producer can sell the credit for cash to a big company that does have a big income tax bill in the state. On top of those, production companies are often exempt from paying sales taxes.

Film subsidies have very little disclosure. For a national report we’re doing that evaluates the transparency of state subsidy programs, we found that, out of 29 film production programs, we looked at, 14 do not have any recipient disclosure. That includes Georgia’s Film Tax Credit, a monstrous program whose costs will exceed $1 billion in FY 2023. One economist estimated that each Georgia household pays $200 a year for this program, and 80% of the subsides flow to big Hollywood studios.

Massachusetts does disclose which studio gets tax credits — eventually.  Currently, the most recent data posted by the state’s Department of Revenue is from 2019. That means I can finally tell you the 2019 film, “Little Women” got $10 million in subsidies. Check back with me in 2023 or 2024 to learn how much Massachusetts residents paid to “Don’t Look Up.”

Determining the ultimate beneficiary of film subsidies is not easy. Big movie studios create LLCs, or subsidiaries, for each movie or TV production. If a state does disclose film tax credit recipients, it usually only lists the LLCs, not their ultimate owners. New York state is unusual: it discloses a major studio’s name, such as Amazon or Netflix, for some productions. It becomes even harder to research film subsidies if a state does not disclose movie titles (we can only wonder what South Carolina subsidized).

Another layer of secrecy is associated with transferability of film credits (when a film producer sells their tax credits to another person or company). About 90% of Massachusetts film tax credits are sold this way, but the state does not tell us who is buying these credits. Illinois, in a rare example, does discloses the seller and buyer data but only via a freedom of information request. In Illinois, those buyers include Walmart, Kohl’s, Apple, and Comcast (buying credits that subsidize shows such as Chi-Raq, Chicago Fire and Judge Mathis). A program meant to create jobs in the film industry ends up being a way for big retailers to avoid taxes.

Lack of proper transparency is not the only problem surrounding those programs – in fact, it’s arguably not even the biggest one. For us, a major concern is the consistent research that shows, no matter the state or program, their cost-ineffectiveness. An evaluation of the Massachusetts film subsidy found that the per-job subsidy for each Massachusetts film job was $100,000. How can an average film job, inherently temporary, ever generate $100,000 in taxes to offset this cost?

Indeed, the study showed that for every dollar spent on the subsidy, only 14 cents were recouped; in other words, Massachusetts loses 86 cents on every dollar invested in film production. Georgia’s program loses 90 cents for every dollar invested. In Florida, it’s 93 cents. A study from the University of Southern California that analyzed the five biggest film subsidies found that the programs do not generate jobs or long-lasting economic growth.

Film subsidies not only lack transparency, but they drain public revenue while providing little community benefit.

“Don’t Look Up” is a warning about climate change, and what will happen if we fail to do something about. But changing the way we live and do business requires major changes, which will cost money. An easy influx of cash could come from eliminating wasteful film subsidies — even if the film industry squeals. States could instead use this revenue to pay for meaningful actions to stop climate change and prepare for what is coming next.