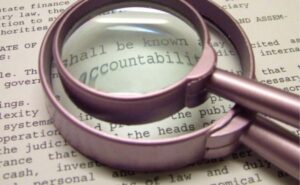 Statement No. 77 on Tax Abatement Disclosures (GASB 77) set forth by the Governmental Accounting Standards Board (GASB) requires Generally Accepted Accounting Principles (GAAP)-compliant governments in the United States to disclose how much revenue they have lost to economic development tax abatement programs.

Good Jobs First has been tracking these disclosures since 2017 when GASB 77 went into effect. As we gathered more data, we began to notice 1) many places don’t have these disclosures in their CAFRs 2) some places do make disclosures but withhold key information and 3) some states have a large number of local governments consistently reporting, while others have hardly any local reporting. We delve into these issues in this special blog series on the issue of GASB 77 non-compliance.

This blog answers the question: when a local government omits the GASB 77 Note on Tax Abatement Disclosures, is it not complying with the rule or is there nothing to disclose? We seek answers using “passive revenue loss” — i.e. foregone revenue due to tax abatement agreements entered into by governmental entities other than the reporting government. For example, if a city abates property tax, sometimes school districts in that city also lose revenue; GASB 77 requires such school districts to report the lost revenue. Here, we present instances where passive revenue loss is reported, but the abating government reports nothing. Read here

Some local governments include GASB 77 Note on Tax Abatement Disclosures while withholding critical information such as the amount of taxes abated. In this blog, we discuss the reasons commonly given and why they are unsatisfactory. There should be nothing preventing local governments to produce at least an estimate for the abated amount in the aggregate. Read here

3. These States Are Missing A Lot of Tax-Break Disclosure Data – Is It Non-Compliance?

Tax abatement disclosures need to be enforced at the state level. Indeed, we are seeing large variations among the 50 states in terms of reporting level, format, and quality. In some states, hundreds of local governments report tax abatements in a consistent format and detailed manner; in others, disclosures are scant and unsatisfactory. We have isolated a few states that have abnormally low disclosure rates among their local governments. Are there no tax abatements to report (some states don’t allow local tax abatements), or is there underreporting going on? Read this blog to find out. Read here

Back to GASB 77 Resource Center