“Should Taxpayer Dollars Go to Companies that Violate Labor Laws?”

“Should Taxpayer Dollars Go to Companies that Violate Labor Laws?”

View this as a PDF.

Thank you, Chairman Sanders and committee members for the opportunity to speak with you this morning. My name is Greg LeRoy and I direct Good Jobs First (GJF), a non-profit, non-partisan research center on economic development incentives and corporate accountability. I founded GJF 24 years ago and have written, trained, consulted and advised on these issues almost continuously since the Carter administration. We maintain three unique national databases on subsidies (Subsidy Tracker, Tax Break Tracker and Covid Stimulus Watch) and two wide-ranging databases on corporate misconduct (Violation Tracker, which compiles U.S. federal, state and local data and Violation Tracker U.K., which covers the United Kingdom).

Good Jobs First believes that companies which receive economic development subsidies and/or government procurement contracts should be held to the highest standards of corporate ethics. Government money should not keep going to any company that violates laws, rules or regulations intended to protect workers, consumers, free markets or the environment. Otherwise, public dollars are subsidizing corporate behavior that is at odds with the policy objectives of economic development and ethical procurement.

That belief informs our work, including our work promoting full disclosure of public subsidies and contracts, including not just the initial awards but also the company’s performance over time.

Amazon.com is one of the most aggressive, if not the most aggressive company in America today seeking economic development subsidies. Since opening its “economic development” office 10 years ago this March, Amazon has been receiving an average of almost 20 state and local government subsidy awards per year. These are mostly warehouse deals, but also data centers, office buildings and various Amazon subsidiaries. We have compiled them at our Amazon Tracker web page: they now total almost $4.2 billion.[1] Last year alone, Amazon.com was awarded 20 deals or payments worth at least $700 million.

These figures understate Amazon’s subsidization. For example, some Amazon Web Services (AWS) data centers receive subsidies which are not fully disclosed. Some receive lucrative yet secret utility tax exemptions on their enormous amounts of electricity consumption. The same is true of some AWS facilities’ sales tax exemptions for their cloud-computing equipment, which are sometimes awarded “as of right,” or automatically. The costs of local property tax abatements for AWS facilities are also sometimes not disclosed.

According to a report in the Wall Street Journal, top Amazon management gave the company’s “economic development team” a goal in 2017 of extracting $1 billion in subsidies per year.

In 2013, AWS was awarded a contract by the Central Intelligence Agency worth up to $600 million over 10 years. That contract award was unsuccessfully contested by IBM. The cloud it created served all 17 agencies within the Intelligence Community.

In 2020, the CIA and its 16 sister intelligence agencies switched to a multi-cloud structure and contracted with AWS and four other companies to run segments of it: IBM, Oracle, Microsoft and Google. These contracts are reportedly for tens of billions of dollars over multiple years.

Most recently, the National Security Agency has re-awarded a $10 billion cloud-computing contract to AWS for the NSA’s Hybrid Compute Initiative. This contract was also contested by Microsoft. Besides these large contracts, Amazon, according to USAspending.gov[2], has had more than 250 small federal contracts totaling about $1.6 million since 2011.

Less well known than these high-profile federal contracts is Amazon’s push into local and state government procurement. As documented by the Institute for Local Self Reliance[3], Amazon began in 2016 to seek local government purchasing business through U.S. Communities, a national purchasing cooperative of 55,000 local government entities. Amazon Business now claims to sell to 90 of the 100 most populous local governments (cities and counties) in the United States, and that 45 state governments buy from it at least once a month.[4] Indeed, in a March 2021 blog[5], Amazon said that sales to governments, and to businesses, were its two fastest-growing sales segments.

It is clear in both economic development and government procurement at all levels: public dollars are deeply baked into Amazon’s business model.

Given that fact, Good Jobs First believes that Amazon.com, Inc. should be held to the highest ethical standards of conduct and if it fails to meet those standards, it should be disqualified from both government contracts and development subsidies.

In addition to the company’s widely reported Unfair Labor Practice citations, Amazon or its subsidiaries have been penalized scores of times by federal or state regulatory agencies or as a result of private litigation on workplace issues such as wage and hour violations.[6]

Five wage and hour cases totaling $81.9 million in penalties include the Federal Trade Commission approving, said the FTC, “a final administrative consent order against Amazon, which has agreed to pay more than $61.7 million to settle charges that it failed to pay Amazon Flex drivers the full amount of tips they received from Amazon customers over a two and a half year period.”[7] Amazon entities have been penalized dozens of times by the Federal Aviation Administration for air safety violations, and more than 20 times by the Occupational Safety and Health Administration (OSHA) for workplace safety violations.

When a company violates workers’ rights to freely organize a union, that contradicts a fundamental idea within economic development and public procurement: that public dollars should always serve to raise living standards and reduce inequality, and they should never be used to suppress wages and benefits and exacerbate inequality. Otherwise, why should we collectively favor a company with subsidies or contracts? Why should we pay a company to make inequality worse?

Corporate recidivism is a longstanding problem in the United States, and many have observed that it continues because penalties are not stiff enough, especially personal penalties for top executives. We submit that the risk of losing of economic development subsidies and government contracts might get the attention of a company like Amazon that is so wed to public dollars.

Thanks again for the invitation and I welcome your questions. 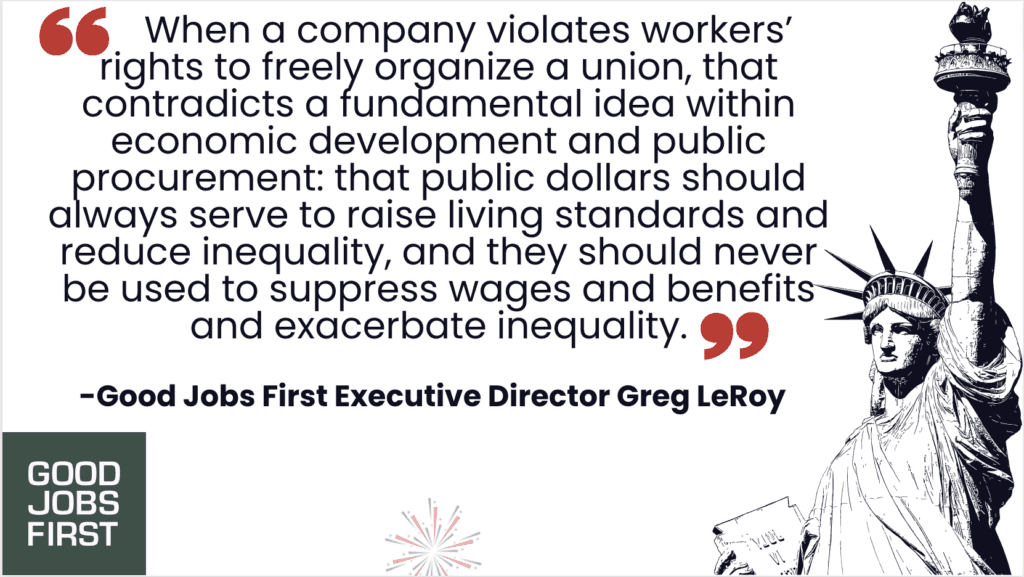 [6] https://violationtracker.goodjobsfirst.org/prog.php?parent=amazoncom. Some of the 126 violations listed occurred at companies before they were acquired by Amazon.com