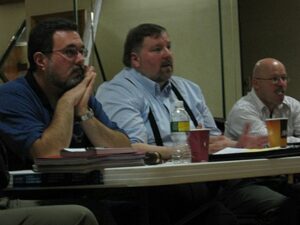 The recent passing of Larry Hanley , International President of the Amalgamated Transit Union (ATU), is far more than a great loss for his union’s 200,000 members.

Simply put, Larry was a radical community organizer disguised as a labor leader. He was a throwback to the era when unions were being founded and did not see themselves in any way separate from other working-class institutions.

He came out of the best tradition of social unionism: unions like the Brotherhood of Sleeping Car Porters and the United Auto Workers and the International Ladies Garment Workers Union whose leaders built coalitions for civil rights and workplace justice for all Americans, not just their own members.  In his nine years as ATU’s leader, he turned the union into a social-justice organizing hub.

Hanley, a New Yorker who moved to Staten Island as a young man, wore his politics proudly on his sleeve. He had a small statue of Mike Quill on his desk, the militant New York president of the Transport Workers Union. Behind him was a bookcase lined with dozens of DVDs of At the River I Stand ; he would eagerly dispense copies of the documentary about the events leading up to the 1968 Memphis sanitation workers’ strike where Dr. Martin Luther King was assassinated.

I had the privilege of working with Larry starting in the fall of 2010, in his first week in office. The Great Recession had plunged transit service into crisis and he had won the presidency as an insurgent, protesting his predecessor’s passivity in the face of record service cuts, fare hikes, route abandonments and worker layoffs.

We instantly agreed: riders needed to organize to push back against the cuts. Larry was always adamant: it couldn’t be about the members; it had to be about the riders. His mantra: “There’s 200,000 of us and 14 million of them. Who do you think has more power?”

It wasn’t an easy message for some local ATU leaders to hear: bus drivers have tense relations with some passengers, and the fare hikes were causing an increase in attacks on drivers. Larry called them “tax hikes on the working poor” and said ATU members were the unwitting “curbside tax collectors.”