Loot, Loot, Loot for the Home Team: How the Proposal to Subsidize a New Yankee Stadium Would Leave Residents and Taxpayers Behind 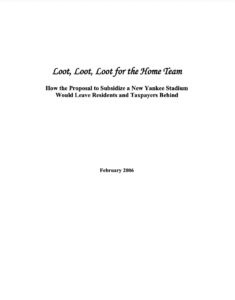 By Bettina Damiani and Dan Steinberg

This report by Good Jobs New York reveals that taxpayers will pay a far higher price for a new Yankee Stadium than public officials and team executives have let on.  Direct and indirect subsidies could exceed $480 million and a city-sponsored analysis suggests the new stadium would not generate enough revenue to cover its cost to taxpayers. The report also argues that subsidizing this stadium is a costly and inefficient strategy for creating jobs. Finally, the South Bronx community that would be most impacted by the project has been excluded from the planning process.