Head in the Cloud(s): Public Funds Lost to Data Centers

In the past several years, demand for cloud-computing data center capacity has skyrocketed, fueled by our growing digital footprint. Despite this, companies like Amazon, Facebook, Apple, Microsoft and Google have demanded and received massive public “economic development” subsidies from states and communities for such facilities, even though these server farms produce few jobs and consume copious amounts of energy.

Data centers are giant warehouses with hundreds of computers that facilitate our online activity by storing massive amounts of data that is on the web. The shift to remote work and schooling options during the COVID-19 pandemic accelerated data center expansion, and this trend is not due to slow down anytime soon.

Running, cooling, and maintaining computers and warehouses requires massive amounts of energy around the clock. In fact, energy accounts for as much as 80% of data centers’ overall operating expenses. That’s why companies dealing in data centers seek cheap electricity rates — both in the form of cheap prices as well as seeking out localities which offer special “economic development” rate discounts. Companies also seek utility tax exemptions, which half of the states have already enacted for data centers.

These expensive energy subsidies for data centers create two major problems: one, ratepayers must pick up the slack, and two, the total subsidy costs are in some cases impossible to determine.

Amazon Web Services (AWS) is one of the largest global and U.S. players in this space. Per Good Jobs First’s Amazon Tracker database, AWS has received at least $560 million in various subsidies for some of its over 80 facilities around the U.S. These deals, which are often negotiated secretly with non-disclosure agreements (NDAs), may include direct cash, sales tax exemptions on the purchases of building materials and the computer equipment, discounted land, discounted electricity rates, utility tax exemptions or discounts, and/or property tax abatements. The loss of local property and sales tax revenue most harms local services, like schooling.

The drainage of public funds is exacerbated by the fact that these data centers are often clustered together, concentrating the burden of costly subsidies on small communities, which due to the secretive nature of many deals often learn too late their money is being given away. 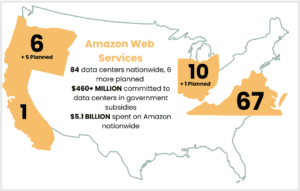 AWS alone has at least 67 data centers across five counties in northern Virginia. Among multiple incentives that data centers get there, the state has a dedicated utility tax exemption for data centers, which in 2021 cost the state treasury $124.5 million – a 12% increase over 2020.

As seen in Amazon Tracker, state governments have also dedicated millions in custom grants and workforce development programs to AWS.  In Virginia, localities can also give companies rebates of property taxes, but poor transparency practices prevent the public from knowing if AWS is a recipient.

These subsidy deals have failed to stimulate local economies. The Virginia Legislative Audit and Review Commission found that “the [tax] exemption has not stimulated much growth in distressed areas.” Even so, the report goes on to warn that other states are using more aggressive tactics to attract data centers, and that Virginia should take action to defend its “competitive position.”

AWS has at least six more facilities in the works in other parts of the country, most of which are seeking subsidies. Local officials in Hilliard, Ohio, recently approved the construction plans for the town’s third AWS data center, bringing the total to six in the county. The existing facilities in the area received generous packages. In 2014, the state approved AWS for at least $93 million in tax exemptions and credits. In recent years, Ohio localities have also approved multiple 15-year, 100% property tax abatements, of which costs have not been disclosed.

While local reporters speculate that the new Hilliard facility will receive a similar welcoming treatment, the public has not been included in those negotiations and processes; the construction of the new facility was simply announced by local economic development authorities after the project was already approved.

Residents of affected localities are often deprived of the very opportunity to weigh in on data center location and funding. Residents of Boardman and McNary in northern Oregon, two small towns with a combined population of 10,000 and 10 AWS facilities between them, can attest to this.

In spring 2022, voters in the Morrow County School District, which serves Boardman, rejected a $138 million school bond that would have made its facilities more accessible and up to date. According to The Oregonian, some voters blamed their “no” vote on Amazon, questioning why they had to pay more in taxes when Amazon was getting out of paying so much of its share (Amazon has gotten more in data center subsidies in Morrow County, over $224 million, than the cost of the bond).

And Amazon isn’t done: it recently announced its plans to open five more facilities in the area, and is expected to seek tax breaks for them as well.

In nearly all cases, it makes no sense for lawmakers and communities to give data centers subsidies: they typically create only a few dozen permanent jobs, and may cause upward pressure on property tax rates and electricity bills.

In February 2022, we learned that AWS walked out of the negotiating room with policymakers from Frederick County, Maryland, after the leaders refused to violate their own zoning laws and development project approval procedures to push the deal through. According to a county councilor, Amazon asked for too much, too fast, demonstrating how spoiled they have become in terms of the treatment they receive from local politicians.

If data center subsidies are used, the public should have lead time to see the terms of the deal before final approval, including a full accounting of the annual costs of discounted and tax-exempted electricity. If a company considers revealing such information as some proprietary secret, it can pay for the project itself.

Moving forward, state and local policymakers should acknowledge they have been making a huge mistake subsidizing an economic activity that is growing rapidly thanks to strong market demand. Given this, and the at best negligible, at worst devastating effects that data centers have on communities, leaders should also stop giving favors to this power-hungry industry.