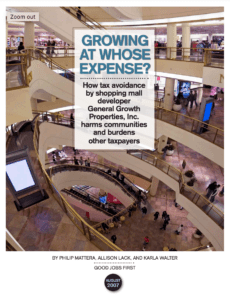 Good Jobs First has found that General Growth Properties, the country’s second largest owner and operator of shopping malls, has drained more than $200 million in revenues from local governments around the country. This is the main finding of a study of economic development subsidies received by GGP as well as the company’s frequent challenges to its property tax assessments.