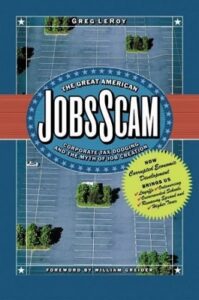 What do Wal-Mart, Dell, Fidelity Investments, Boeing, and Cabela’s have in common? They’re all part of a $50 billion a year scam in which—in the name of “job creation”—corporations play states and cities against each other to win hefty taxpayer subsidies that routinely exceed $100,000 per job. But do they provide more jobs, higher wages, or improved living standards in exchange?

Good Jobs First Executive Director Greg LeRoy exposes these deals for what they are—no-strings-attached free rides for corporations that rarely create any new jobs. In fact, after securing these packages, many companies lay people off, pay poverty wages, or even relocate to other states.

This is the Great American Jobs Scam: a costly bait-and-switch that swindles communities in more ways than one. They lose jobs—or gain jobs so low-paying they do nothing to help the community—and they lose revenue through massive corporate tax breaks. That means fewer resources for maintaining schools, public services, and infrastructure.

LeRoy exposes corporations’ careful orchestration of this scam, dissects government and corporate mumbo-jumbo with plain talk, and offers commonsense reforms that will give taxpayers powerful new tools to protect our communities.

Read the book (with updated notes added by LeRoy)

Introduction: Money for Nothing

An intentionally constructed system that enables corporations to exact huge taxpayer subsidies by promising quality jobs – and then lets them fail to deliver. … corrupted definitions of “competition” that salute corporate bottom lines while thumbing their noses at common sense, social science, and good government. …the legacy of a 50-year campaign by corporations to divide and conquer the states – as well as the suburbs – preaching a gospel that governments at all levels must never be allowed to cooperate.

How companies decide where to expand or relocate is driven by business basics – subsidies rarely make a difference. The trouble is, the way the system is rigged, companies are getting huge subsidies to go where they would go anyway. (Location Management Services, Hewlett-Packard, Toyota, Cabela’s).

Chapter Three: Fantus and the Rise of the Economic War Among the States

In the depths of the Great Depression, a young Chicago industrial real estate salesman named Leonard Yaseen grew impatient with his father-in-law and boss, Felix Fantus. …Thus was born the Fantus Factory Locating Service, one of the most powerful yet obscure consulting firms in U.S. history. (The birth of IRBs, Grant Thornton and the “business climate,” Mintax, Deloitte and Boeing, Ernst & Young on “Milking the Cash Cow”).

Chapter Four: “Single Sales Factor” and the Corporate Assault on the Income Tax

This chapter is still fine in explaining corporate income tax-dodging issues, but Good Jobs First has since exposed how 16 states allow companies to keep some of their employees’ state personal income taxes, that workers are literally “Paying Taxes to the Boss,” as we called our study in 2012.

Suppose you’re a manufacturing executive and you don’t like paying corporate income tax. How’d you like to get an 80 or 90 percent tax cut? No conditions, no strings attached. Just be sure your state manufacturers’ association keeps saying this gigantic tax cut will create jobs, jobs, jobs. (Fidelity Investments/Massachusetts, Illinois, Georgia, the Multistate Tax Commission and the Long-Term Corporate Assault on State Cooperation on Income Taxes).

This chapter also still holds but of course the massive good news since is the issuance of GASB Statement No. 77 on Tax Abatement Disclosures, which covers all kinds of economic development tax breaks (sales and income taxes, as well as property) and the data is flowing as of this writing in June 2017! And in places like Louisiana, community groups like Together Louisiana are fighting back to end decades of wasted tax giveaways.

Companies love to locate in areas with good schools; they just don’t want to pay for them. Families don’t get a 10-year holiday on their property tax for moving into their preferred school district, but companies often do. (Exxon in Louisiana. Poor Pay More in Ohio, TIF on Steroids in Illinois, International Paper “double dipping” in Maine).

Good Jobs First has done gobs of studies since 2005 that completely leapfrog this chapter. For a summary of six studies we have issued linking subsidies to suburban sprawl, click here. For a summary of our studies on smart growth and unions, click here. And whereas Wal-Mart was the subsidy juggernaut them, today (and we created an entire website on that), it is Amazon getting taxpayer bucks to undermine Main Street.

Taxpayers often subsidize sprawl – in the name of jobs (TIF, enterprise zones). The economic war among the states is a serious problem, but so is the economic war among the suburbs. Stay tuned as we investigate the real suburban issue today: is a mall “blighted” unless it has a Nordstrom? We report. You decide. (Wal-Mart, Proposition 13, “Greyfields” and “Ghostboxes,”).

Chapter Seven: Loot, Loot, Loot for the Home Team — (and check out Field of Schemes for the latest on sports facility scams).

The obvious winners are the owners of the teams that inhabit the stadiums erected at public expense. About two dozen of them appear on the Forbes list of the 400 wealthiest Americans. Owners may make money on operations, but selling remains a sure thing. Just ask the President of the United States. (Dodgers, Orioles, Colts, Browns, Rangers, and Convention Centers: Overbuilt)

If we updated this chapter, we’d show the trend has only gotten worse. Indeed, our friends at the Institute in Taxation and Economic Policy have found that even profitable Fortune 500 companies are paying less than half the combined statutory state income tax rate.

There is a mountain of evidence, from national statistics and from individual states, that over the past 25 years corporations – especially big ones – are getting lower tax rates and paying a smaller share of the cost for public services, shifting the burden onto everyone else. (How Subsidies Zero Out Income Taxes. The Poor and Middle Class Pay More. Is Corporate America Pulling Out?)

There is enormous progress to show for these past 12 years in the American public becoming more informed and active on economic development subsidy abuse. Some states have eliminated entire programs (e.g., California dumping TIF, Michigan ending MEGA). There is far more investigative journalism. Community Benefits Agreements have become accepted ways to improve major redevelopment projects. You’ll just have to get on Good Jobs First’s email list to get all the news. GASB Statement 77 stands to rewrite the debate. Since 2005, we’ve also has an adverse U.S. Supreme Court decision and a huge blown opportunity for a first-ever two-state “cease fire” in the “economic war among the states.” Clawbacks are far more common and many programs have been structured as “performance-based,” making clawbacks unnecessary. 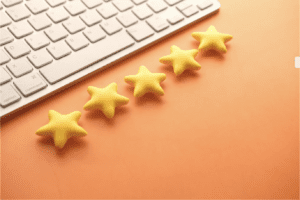 “A powerful compendium of corporate tax dodging in the U.S. Most disturbing is evidence that states and cities are usually paying companies to do whatever they would have done anyway. A persuasive study supported by lots of disturbing evidence.”

“In the field of investigative business reporting, few writers are on a par with Greg LeRoy. LeRoy’s investigative style busts chops and sizzles up his narrative, especially the way he describes the trap that so many towns fall for.”

“a brisk and breezy tour through these sweetheart deals…. enough examples to outrage free-market conservatives and anti-corporate liberals alike.”

“bubbles with rage… asks the crucial questions that should accompany any incentive package: Would those jobs have come without the tax break? How much are they really costing taxpayers? What kinds of growth patterns do they encourage? LeRoy knows his material.”

“Greg LeRoy… knows how to conduct an educated rant. In 205 well-documented pages, LeRoy builds the case, with examples from almost every state, that the jobs don’t materialize and the subsidies drain resources from other sectors of the community.”

“the best job yet of exposing how business and state/local governments have checked into the No-Tell Motel together and how business has gained the advantage nearly every time. LeRoy argues persuasively that tax rates aren’t the main thing driving business locations anyway; tax discounts are just something to be extracted because companies have figured out they can do it.”

Greg LeRoy, a “Prophet of accountability,” “skewers some of the most common tax breaks and argues that states desperately need to reform their incentive programs.”

“…a parade of damning case studies showing why communities should not woo corporations with subsidies. Corporate tactics, he finds, include quickly shuttered subsidized facilities, union busting and jobs that pay below the poverty line.”

“a roll call of economic development’s worst excesses. …a style that is simple without being simplistic… and a nice chapter on sports stadiums that someone might want to read aloud to Mike Bloomberg.”

“His biting exposé alleges that companies use extortionary practices to obtain favorable treatment from state and local governments in exchange for bringing in or keeping jobs. But then, instead of delivering the promised jobs, these companies often move, shift, or cut positions, leaving the locality in worse shape than before. Venerated companies such as Fidelity, Bank of America, and Dell Computer find themselves bedfellows with such known villains as Enron and Wal-Mart in LeRoy’s caustic chronicle.”

“The fairy tale of public policies ostensibly designed to spur growth by subsidizing private companies is exposed… …LeRoy amasses a great deal of evidence from states and cities around the country showing that publicly financed economic development programs are outlandishly wasteful.”

“succeeds in elucidating the abstruse tax-break mechanisms by which corporations fleece local governments in such a clear, compelling and accessible way. …offers concrete things to do about it…”

“case study after case study of corporate rip-offs of communities and states. LeRoy shows how blind faith, bad negotiating and illusory promises leave local and state government officials with little or no guarantee that new and permanent jobs will be created.”

»Focus on the Corporation

“It is hard to tell whether city and state officials are just stupid or actually corrupt, but one thing is for sure – there is a scandal of monumental proportions going on and LeRoy is blowing the whistle.[This book] should not only be read but studied by community activists, planners, and public officials. …a wonderful book to use in a wide range of courses on government and public policy.”