EVENT: Chronicling Corporate Misconduct in the United Kingdom and Beyond 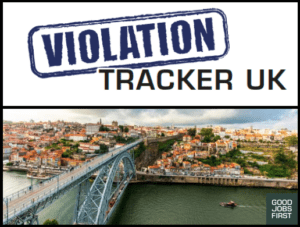 Join us for a special event on November 9 marking the one-year anniversary of our newest database, Violation Tracker UK. Plus, we’re hiring someone to help with the outreach around this powerful tool for tracking corporate misbehavior.

You’re invited to join us for a celebration of its use and an update on coming attractions!

Whether you’re already a power user or an interested newcomer, this event is for you. We’ll highlight how this unique database on corporate misconduct in the United Kingdom is empowering activists, journalists and scholars. Speakers include:

For newcomers: Phil Mattera will spend some time providing quick training on the database’s powerful features.

Why Attend? Some VT UK Background

Corporate responsibility and ESG issues are receiving more attention than ever in the United Kingdom. Numerous services now exist to help investors pick ethical companies to add to their portfolios.

Yet what about the irresponsible companies—the ones that break the rules and which investors may wish to shun? That’s where Violation Tracker UK comes in.

The free database is a unique resource for identifying the companies that have been sanctioned by government regulators for infringements in areas extending from environmental compliance and employment standards to consumer protection and accounting fraud. Along with investors, users of the database include activists, journalists, lawyers, academics and public officials. VT UK is modeled on the U.S. Violation Tracker, which was launched in 2015.

VT UK collects data from four dozen regulatory agencies, ranging from the Health and Safety Executive and the Financial Conduct Authority to lesser known bodies such as the Groceries Code Adjudicator and the Gangmasters and Labour Abuse Authority. The latest agency to be added is the Jersey Financial Services Commission.

Since its launch, VT UK has grown to 77,000 entries dating back as far as 2010. We are constantly on the lookout for new datasets. For example, HM Revenue and Customs recently released a list of about 200 companies fined for having inadequate protections against money laundering. Their names are now in VT UK.

The candidate will be responsible for making the UK’s labour and journalism communities more aware of Violation Tracker UK and how it can be used to assist in union campaigns and/or reporting. The consultant will accomplish this by communicating in person (individually and at public events), online and via demonstrations of how the database works.

The consulting rate for this independent contractor position will be US$35 per hour. This is a remote position. Applicants may be based anywhere in the UK.

More details, including how to apply, are available here.