Ending the Economic War among the States 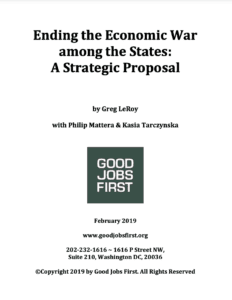 Many Americans are rightly aghast at the “economic war among the states” as exposed by Amazon’s HQ2 auction. Now, they are also emboldened to challenge this corrosive war by the enormous community organizing victory in New York City that caused Amazon to cancel one new headquarters in Queens. Good Jobs First proposes five ways to rein in the problem of governments over-spending for economic development deals—so they can better focus on strategies that work.