48 States plus DC Disclose Job Incentives on Company-Specific Basis, But Few Do It Well 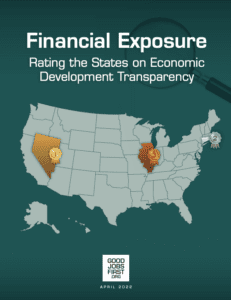 Washington, DC — All but two states disclose company-specific data online about their economic development incentive awards, but few states disclose very well or consistently across programs. Over time, some states have greatly improved their transparency practices, consistent with public expectations about open government.

Nevada, Connecticut, and Illinois have the best overall disclosure web pages, but even Nevada’s score, at 64 out of 100, would be near-failing as a letter grade. Compared to their previous ratings, Nevada, Kansas and South Carolina showed the greatest improvements.

Most states rate poorly on giving advance notice of proposed deals, and only 4% of the 250 programs rated post the full incentive details ahead of a public hearing so that residents can knowledgeably oppose, support or suggest improvements to them.

Those are key findings issued today by the watchdog group Good Jobs First in its sixth such “report card” study. The study, entitled Financial Exposure: Rating the States on Economic Development Transparency, is online at https://goodjobsfirst.org/financialexposure.

The study evaluates four or five major economic development incentive programs in each state plus DC, rating them on 23 different variables. It finds that 48 states plus the District of Columbia — or 96% — name at least some corporate recipients online. But of the 250 programs graded, only 62% provide any such deal-specific disclosure. The gap reflects how inconsistent states are in reporting on all their major programs.

“States began disclosing subsidy awards online in 1999,” said Kasia Tarczynska, senior research analyst and lead author of the study. “Yet almost half the states failed to score even 20 points out of 100 on our 2022 report card. The states know how, but some still lack the will to be transparent.”

(In fact, the average score for all states is only 22.)

The most remarkable improvement over the past eight years is seen in Nevada, where a law enacted in 2015 requires the governor’s economic development office to disclose recipient level data for various tax abatements. As a result, Nevada’s score rose from second to last place in 2014 to first place this year.

But some states got worse or stayed bad. Alabama and Georgia declined from 2014, when they had a small amount of transparency, to their 0’s today. States with still-minimal disclosure include North Dakota, New Hampshire, Maine, and Delaware.

“Transparency does not necessarily mean a program is effective or accountable,” Tarczynska emphasized. “But if you cannot even see who got the money and what they said they would do with it, you can’t answer the most basic questions about return on investment or equity.”

Nonetheless, these findings show state-level economic development transparency continues to grow in the right direction. More states are disclosing subsidy recipients and integrating this data into their online data portals. In 2014, 55% of examined programs disclosed company-specific data; now it is 62%.

The report recommends that states create comprehensive subsidy transparency portals that are easy to find, understand, and use. At a minimum, users should see company names and subsidy amounts for all subsidy programs. Job creation, wages and benefits, investment promises and outcomes, as well as any penalties imposed for shortfalls, need to be included.  States should also practice transparency before a subsidy is approved: all applications should be posted on an agency website long before they are subject to final approval to allow for community input and public participation.

Editor’s Note: Good Jobs First is a non-profit, non-partisan research center promoting accountability in economic development. Founded in 1998 by Greg LeRoy, it is based in Washington DC.